Defeats in the ongoing tour of Australia have made stats worse.

India’s surrender in the ongoing One-Day International (ODI) series against Australia has once again opened the debate about how capable is Mahendra Singh Dhoni now of leading the side. MS Dhoni often credited for team’s success is at the receiving end after team’s series loss to Australia. Also Check- India vs Australia- Full coverageAlso Read - Sunil Gavaskar Reacts After Rahul Dravid Formally Applies For Team India Head Coach Job on Deadline Day

No doubt, bowlers have let the team down as they failed to defend decent totals (in fact more than decent), but there are shouts of MSD lacking that fervour and spark in his captaincy. Also Read - Rahul Dravid Officially Applies For Team India Head Coach's Post; VVS Laxman Likely to Take Over at NCA

Post-World Cup 2015, team India’s winning graph has gone down. The team played four ODI series, three under MSD captaincy. Out of these four, India suffered defeat in three. The lone series victory after World Cup came against Zimbabwe under the leadership of Ajinkya Rahane in the absence of MSD and other star players. POLL- Should Virat Kohli replace MS Dhoni as captain in other formats as well? Also Read - Victory of Islam: Pak Minister Sheikh Rasheed After India-Pakistan T20 World Cup Match | Video

India toured to Bangladesh and lost the three-match ODI series by 1-2. Then Men in Blue hosted South Africa and were handed 2-3 defeat in the five-match series. Now the latest to add to the string of failures is a 0-3 defeat against Australia with two more matches to go. So till now, India, under MSD after the World Cup, out of 11 matches have lost eight and won just three. The win percentage in these matches is just over 27%.

Defeats in the ongoing tour of Australia have made stats worse. 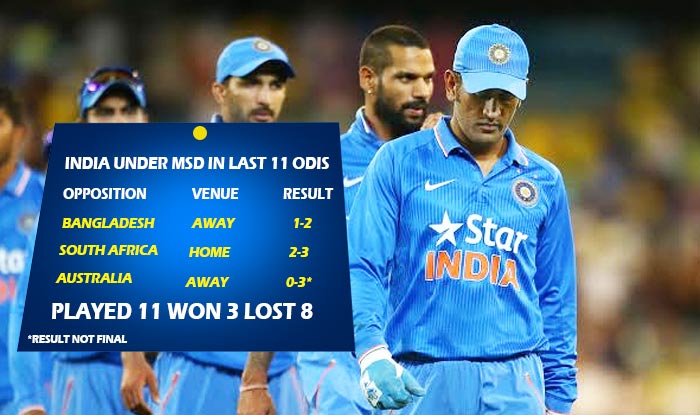 With India doing well in the longer-format of the game under Virat Kohli, fans have been vocal about Dhoni’s incapability lately. However, Board of Control for Cricket in India (BCCI) has hinted Dhoni is here to stay as India’s limited-overs captain till upcoming World T20 in March.

Unfortunatley, team’s poor run has coincided with Dhoni’s own dip in form as well. Out of last 11 innings, MSD has managed to score just two half-centuries, including unbeaten 92 against South Africa. The not so impressive record of late both as captain and as a batsman is very much against Dhoni.