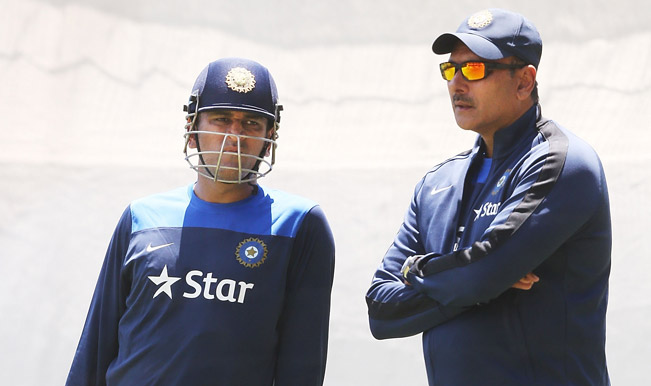 Sydney, Jan 4: Even as speculation about Mahendra Singh Dhoni‘s sudden retirement from Test cricket persists, India’s Team Director Ravi Shastri has described it as a “well thought-out” move and lashed out at critics who had accused the wicket-keeper-batsman of abandoning a sinking ship.

“I believe it is a well thought-out move. A lot of hard work has been put into this team over the last one year and he felt that it was time to hand over the charge to a fresh young leader. He has made sure that there will be no speculation over who will be captain afterwards or who will be wicket keeper after he is gone.All these questions are answered. Dhoni isn’t leaving without reason, it’s not ill-timed. It’s a long process and everything about it has been a selfless motive from Dhoni,” Shastri told PTI in an interview.

Dhoni might have been sorted in his mind about the timing of his retirement but for the team it was a huge shock. Shastri hoped that the celebrated stumper, who led India to two World titles, would continue to play ODIs and torment his rivals “like a king”.

“This news was a bolt from the blue for us. He knew what words to say and he was honest about it. Dhoni is an all-time Indian legend, a cricket great. And this team sees him like one and not only for what he has done. He hasn’t chased statistics or numbers or fanfare farewell. He was honest with himself and they respect him for it. This is a young team and an example has been set in front of them and it’s a great learning for them. Dhoni gave his everything for Indian cricket, irrespective of the format. I am sure he will keep playing limited-overs formats for a couple more years like a king and some opposition team will get hurt,” he said.

Asked how he rates Dhoni as a Test captain, after 0-8 in 2011-12 and this calendar year of overseas Test cricket, Shastri said the stumper gave it his all and his detractors do not realise the enormity of his contribution.

“For playing 25 years for the country Sachin Tendulkar was an exception and rightly so. But in the past there have been so many players who play for stats or want fanfare farewells, they just keep on playing. But there are very few who don’t need that. Dhoni belongs to the ‘I don’t need it’ club. And there are people speculating about his motives and judging him that he abandoned a sinking ship and all that nonsense. Forget playing, have these people even watched 5 percent of the cricket Dhoni has played?” he asked.