Suspended Rajasthan Cricket Association (RCA) deputy president Mehmood Abdi has alleged that N Srinivasan committed contempt of court by participating in the Annual General Meeting (AGM) of the BCCI at a city hotel on Monday. 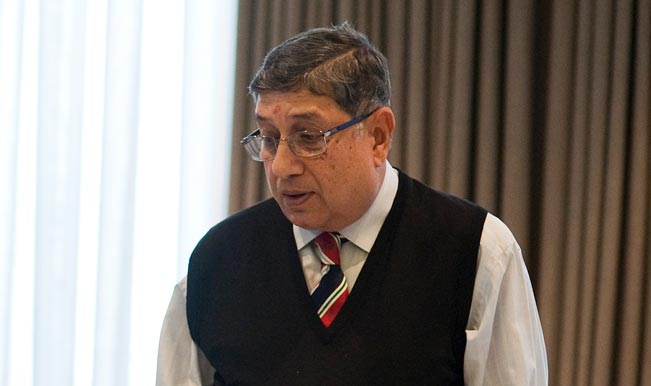 Chennai, Mar 2: Suspended Rajasthan Cricket Association (RCA) deputy president Mehmood Abdi has alleged that N Srinivasan committed contempt of court by participating in the Annual General Meeting (AGM) of the BCCI at a city hotel on Monday. Abdi, the permanent representative of RCA in BCCI, claimed that despite being asked to stay away from the AGM by the Supreme Court, Srinivasan participated in the proceedings. Also Read - Strict COVID-19 Rules on Card as Supreme Court Asks Centre to Take The Lead Amid Sudden Spurt in COVID Cases

“Srinivasan has again committed the contempt of Supreme Court order dated 27th Feb, 2015 whereby he is restrained from attending the BCCI AGM to be held on 2nd March. Srinivasan has been given a limited right to vote in the election. The election is only for office bearers and vice presidents of BCCI. Even nomination forms were invited to be filled only for these posts,” he said. Also Read - Arnab Goswami’s Plea Against Privilege Notice Adjourned for Two weeks by SC

“However, in gross violation of the apex court order, N Srinivasan as per the final voter list by Sanjay Patel will now participate also in the formation exercises of working committee, standing committees, sub committees, including governing council of IPL and also for continuation of his own appointment in ACC. This would be like full participation in the AGM. This will not only show conflict of interest in full play and also violation of SC order dated 27th Feb, 2015. Both Srinivasan and Sanjay Patel were parties to the SC order and are guilty of contempt,” Abdi alleged in a letter sent to media organisations.

Srinivasan has been asked by the apex court to step aside as the BCCI president on a petition alleging conflict of interest in him holding both a BCCI position and ownership of an IPL team, Chennai Super Kings. Srinivasan had last week apologised to the Supreme Court for attending a BCCI working committee meeting in spite of a court order asking him to stay away from Board affairs till his “conflict of interest” charges were cleared.

Through his lawyer, Srinivasan also told the Supreme Court that the ICC chairman will not participate in the BCCI AGM. As per Supreme Court directives, Srinivasan only had the voting rights as Tamil Nadu Cricket Association president but Abdi claimed that he violated the court order by participating in the formulation of the committees.