N Srinivasan seeks to be restored as BCCI president

ICC chairman N. Srinivasan Friday requested the Supreme Court that he may be restored to his position as Indian cricket board chief and be allowed to function as the Mudgal Committee 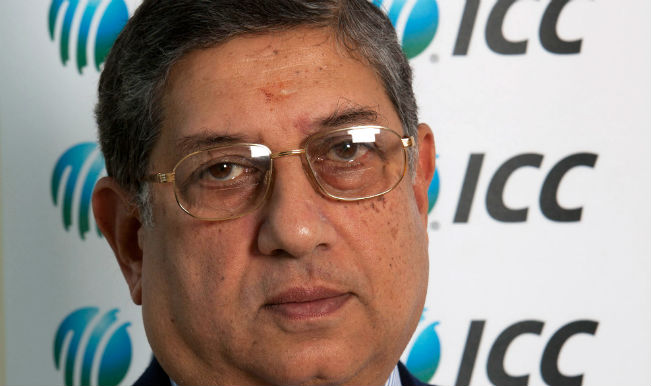 New Delhi, Nov 21: ICC chairman N. Srinivasan Friday requested the Supreme Court that he may be restored to his position as Indian cricket board chief and be allowed to function as the Mudgal Committee, that probed allegations of match fixing and betting in the 2013 edition of IPL, has cleared him of all charges levelled against him. Also Read - India vs England: BCCI President Sourav Ganguly Confirms The Venue of Pink-Ball Test

Seeking to be discharged of his undertaking that he would not perform any functions as Board of Control for Cricket in India (BCCI) president and resume office as its president, Srinivasan in his response to the Mudgal Committee report pointed out that he has not been found to be involved in any betting and match fixing activities or scuttling of investigations. Read – Mudgal Committee Report: Sunil Gavaskar says comments against N Srinivasan fabricated Also Read - IPL 2020: KKR Spinner Sunil Narine Cleared of Suspect Bowling Action

“There is absolutely no reason for me to continue to stay away from my elected position in BCCI. I have already lost close to a whole year of my elected term on the basis of wholly false and motivated charges. I pray that this Hon’ble Court, therefore, discharge me from my undertaking and allow me to resume my office as president,” Srinivasan said in his response to the court.

International Cricket Council (ICC) chairman Srinivasan had March 28 given an undertaking before the apex court that he would not discharge his duties as BCCI president till the completion of investigation into the allegations of spot fixing, betting and other charges.

Srinivasan said this in his objections to the Mudgal Committee report on which he was issued notice Nov 17. The committee, in its report, has said that Srinivasan’s son-in-law Gurunath Meiyappan was involved in betting though it exonerated him of spot fixing charges. Referring to the conclusions of the Mudgal Committee report, Srinivasan said: “I believe the conclusions in the report that I was not involved in any betting or match fixing activity nor did I scuttle any investigation clearly vindicate my stand that all the allegations made against me by the petitioner (Cricket Association of Bihar) and other persons inimical to me were completely false, baseless and motivated out of malice.”

However, Srinivasan sought to brush aside as “minor incident” a conclusion in Mudgal report which said that he did not act against a player who was involved in the violation of the Players’ Code of Conduct. Srinivasan said that when the allegation of violation of the code of conduct by a player came to light it was not he but Shashank Manohar who was BCCI president. He said that at that time he was the secretary of the body.

“I may add that the incident explained by Shri Ranjib Biswal (president of the Odisha Cricket Association who was the manager of the Indian cricket team when the incident involving the player took place) involving the supposed individual 3 was not in relation to IPL. Further, it was not in relation to any corrupt activity, betting, gambling, fixing of matches etc. but a minor incident,” Srinivasan said in his response.

Differing with the Mudgal Committee report that no action was taken against the said player, Srinivasan, recounting the sequence of steps leading to the said player being administered “warning”, said in his response: “Therefore, it is not correct to say that no action was taken by me and four other Board officials. Apparently, the then President, BCCI had dealt with the issue directly and I cannot be attributed with any inaction.”