It is no secret that Pandya and Stankovic are friends, but has the friendship turned into an affair?

Was Hardik Pandya‘s rumoured girlfriend Natasa Stankovic chilling in the India all-rounder’s red car? Fans feel Stankovic was and that has got the rumour mill talking. It is no secret that Pandya and Stankovic are friends, but has cupid struck between the two ‘ friends’? That is still speculative, but recently both of them posted pictures from their Instagram handles in which they were seen in a swanky red colour car. Their recent post has made fans believe they are in a relationship.Also Read - IPL Retentions: From Harshal Patel to Hardik Pandya; Biggest Exclusions

And this is what Stankovic shared recently.

Here is how fans reacted to spotting them using the same car: 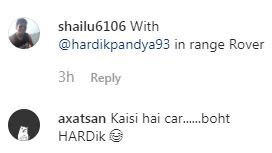 Not long back, 27-year-old Stankovic had posted a heartwarming message for ‘best friend’ Hardik Pandya on his 26th birthday. Apparently, they are good friends and connected on social media platforms. Natasa was also a part of the Diwali celebrations that was arranged by Krunal Pandya and his wife Pankhuri.

Earlier, Pandya successfully underwent a lower back surgery in the UK. After the surgery, he took to Instagram to share a video where he can be seen taking help to walk, while in another clip he was seen on a wheelchair while going back to the hotel.

Hardik would hope to join the Indian team soon after he completes his rehabilitation. He had picked up the injury during the Asia Cup last year and played through it during the World Cup.