National Basketball Association (NBA) star Dwight Howard, a centre for the Houston Rockets, is under investigation for allegedly abusing his seven-year-old son. 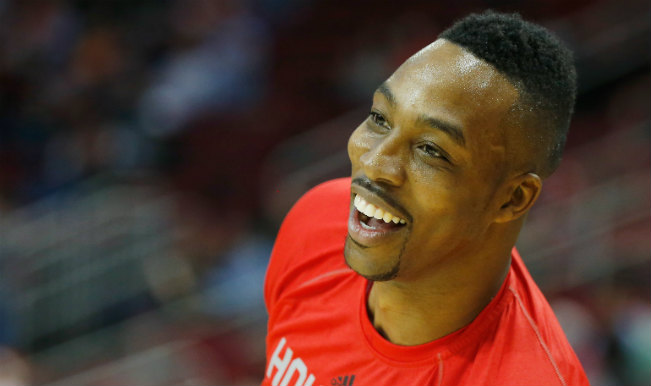 Houston, Nov 19 National Basketball Association (NBA) star Dwight Howard, a centre for the Houston Rockets, is under investigation for allegedly abusing his seven-year-old son. Authorities in Georgia said Tuesday that Howard’s ex-girlfriend Royce Reed has accused Howard of beating their son. She had made the same accusation in Florida where a court closed the case in September with a ruling that the allegation was not substantiated, reports Xinhua. Also Read - LAC vs DEN Dream11 Team Prediction Basketball NBA 2020 – Fantasy Tips, Starting 5s For Today's Los Angeles Clippers vs Denver Nuggets Basketball Match at AdventHealth Arena, Orlando 6.30 AM IST September 10

Howard’s lawyer David Oscar Markus said in a statement Tuesday that Reed was using their son as a pawn to extract money from Howard. “It is appalling to see a mother use her son as a pawn against his father in attempt to extract money, which is what is happening in this case,” Markus said. Also Read - LAC vs DAL Dream11 Team Prediction Basketball NBA 2019-20 – Fantasy Tips, Starting 5s For Today’s Los Angeles Clippers vs Dallas Mavericks Basketball Match at Advent Health Arena, Orlando 6.30 AM IST August 26

“While Royce Reed continues on her aimless quest with the media, Dwight Howard will continue to act in the best interest of his children and do whatever is necessary to protect them.” A Rockets spokesperson said the organisation won’t comment on the issue. Howard, an Atlanta native, has played in the NBA for the Orlando Magic, Los Angeles Lakers and the Rockets.