Her meteoric rise from a small village in Jalandhar to one of the best race-walkers in India has been phenomenal.

New Delhi: Grit. Determination. Perseverance. These superlatives aptly describe the new Arjuna Awardee, Khushbir Kaur. The race-walker from Moga, Punjab, who is the 2014 Asian Games silver medallist, was among the 17 winners of the prestigious award this year and hopes to do better, becoming a Khel Ratna one day. Also Read - Promise to Bring Many More Laurels to The Country: Rohit Sharma After Khel Ratna Honour

Beaming with joy, Khushbir was ecstatic after receiving the accolade by the President of India, Ram Nath Kovind. She was accompanied by her mother Jasbir Kaur to the ceremony held at the Rashtrapati Bhavan on August 29. Also Read - Final List Out; Rohit Sharma, Vinesh Phogat Among Five Athletes to Receive Khel Ratna

It was August 3 and Khushbir was in London for the IAAF World Championships when she came to know about the news from her mother. Also Read - Sprinter Hima Das Nominated For Khel Ratna Award by Assam Government

Her meteoric rise from a small village to one of the best race-walkers in India has been phenomenal, and the Arjuna Award is a testimony of the fact. In 2014, Khushbir won a silver medal in the 20km race-walk event at the Incheon Asiad. 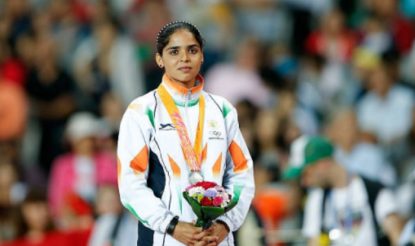 It was a historic moment for the country as she became the first Indian woman to do so.

Khusbhir followed that silver with a bronze at the Asian Race-Walking Championship in March and then broke the national record in May at the Race-Walking World Cup.

Her biggest moment came when she qualified for the Olympics in Rio last year, but tough competition at the biggest sporting stage saw her finishing a lowly 54th in 20-km race-walk. She was nursing a slight niggle after training in high altitudes and rued missing a good physiotherapist to take care of such eventualities.

Khusbhir never took a liking for any particular sport in her growing days. It was her mother, who motivated her and thereafter she developed interest. Father’s death in 2000 did not help but her mother didn’t let the void affect her daughter’s dreams and aspirations.

“My mother has always egged me on and even helped me getting trained under a coach as a junior, which helped me improve,” Khushbir said.

She remains indebted to Baldev Singh, her coach, who pushed her to perform at the junior level. “My mother has sacrificed a lot for me, and I want to thank my coach as well for what I am today,” she said. 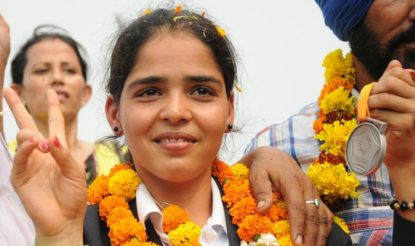 Khusbhir also thanked the state government of Punjab for providing her with financial aid and scholarships. Earlier this year in January, the government acknowledged her accomplishments by appointing her as DSP with Punjab Police.

Khushbir feels participating at the IAAF World Championships will go a long way in preparation for the Commonwealth Games (CWG) in Australia and Asian Games in Indonesia next year. She gave her best in London but it was a recurring leg injury that hampered her performance. She finished 42nd in the event.

“Aise world tournaments mein particpate karke achcha exposure milta hai (Participating in such tournaments will help me in the longer run and give me exposure)”, she said.

She now wants to go a step ahead and be among the medal winners at the CWG and Asian Games next year.