McCullum's monumental 195 was backed up well by a clinical effort by Trent Boult and co. for New Zealand. 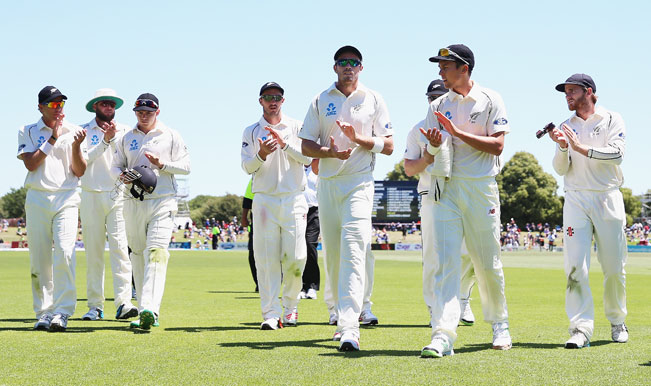 New Zealand cruised to a comfortable eight wicket win against Sri Lanka at Christchurch to register a 1-0 lead in the two Test series, thanks to a complete display that will see them surge in the International Cricket Council (ICC) rankings to clinch the fifth spot if India doesn’t win against Australia in third Test at Melbourne. After bowling out Sri Lanka early in the day, New Zealand leisurely went about chasing down a modest 105 set by the Lankans despite losing their openers cheaply. Also Read - Lankan Navy, Indian Ships Battling Re-ignited Fire on Board Oil Tanker

Despite several good moments that the match provided, this Test match truly belongs to Kiwi skipper Brendon McCullum’s brutal assault in the first innings to make 195 on Boxing Day. Coming in to bat in a tricky situation on day one, McCullum launched into the Lankan bowlers like he was on a six hitting mission of sorts. Also Read - New Zealand Reports 4 New COVID-19 Cases

All-rounder Jimmy Neesham too, deserves a special mention for his feats. After smashing an aggressive 85 with the bat, he chipped in with key dismissals too. It was eventually the Sri Lankan batsman’s ineptitude against the pacers that led to their downfall. McCullum’s knock was backed up by a scintillating performance with the ball to as the visiting batsmen had no answer to Trent Boult and co, who bundled them out for just 138.

Sensing that the Sri Lankan batsmen were all at sea against the seam movement and the cold breeze of New Zealand, McCullum enforced the follow on. This time, Sri Lanka, led by Dimuth Karunaratne took the attack to the opposition and showed a lot of tenacity and grit in forcing a positive result. Karunaratne’s crafty hundred was backed up well by Angelo Mathews’ half-century and pacer Shaminda Eranga’s fighting knock down the order.

Chasing a measly 105, the result was never in doubt despite the Black Caps losing a couple of wickets early during the chase. Kane Williamson and Ross Taylor then took charge of the chase and patiently kept the scoreboard ticking and look their team home with two sessions to spare.