Crossing all the hurdles of league stages and semifinal, England and New Zealand have emerged as the two finalists of ICC World Cup 2019. Ousting heavyweights England and Australia, Kane Williamson and Eoin Morgan’s sides have caused huge upsets going into the final. As both the sides stand on equal footing, the stage is all set for the cricketing universe to witness a high-octane final of the ongoing showpiece event at Lord’s, on Sunday. Whoever wins the final, cricket will get a new World Cup winner as none of the two teams have won the tournament on earlier occasions. While this will be New Zealand’s second attempt to win cricket’s most coveted trophy, after failing to win it in the final of ICC World cup 2015 against Australia, England will ply their trades in the final for the fourth time. They failed to win it in the finals of 1979, 1987 and 1992 World Cups.

In happy hearings for fans, the weather forecasters have predicted no chance of rain in London, on Sunday. Throughout the day, the chances for rain remain a constant zero and fans can expect a full-length cricket World Cup final without the interruptions of rain. 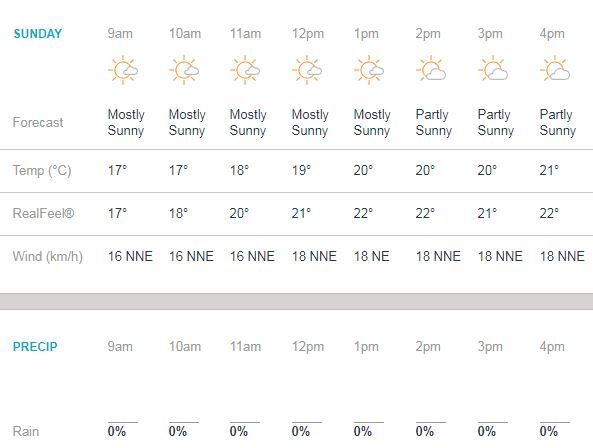 All the World Cup matches at Lord’s have been uninterrupted by rain, so far. While it is expetced to be mostly sunny, cloud-cover might be seen partly in between. But they have been anticipated as unthreatening and should not bring showers. The temperature is expected to hover around 17-21 degree Celcius throughout the day.