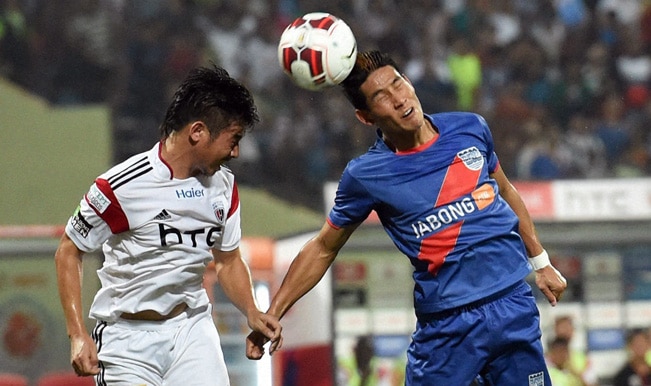 The home side came into the clash having thumped FC Pune City 5-0 but the visitors managed to hold FC Goa to a 1-1 draw in Guwahati. Both managers stuck with the same lineup as they did in their previous game but the co-owned by Ranbir Kapoor started slowly. Cmovs was warned (without being shown a card) by the referee right in the second minute for a dangerous tackle on Isaac Chansa. Andre Moritz, carrying a head injury that was thoroughly bandaged, was the first to attempt a shot in the seventh minute; which rolled well wide of Rehenesh TP’s goal. Also Read - MCFC vs ATKMB Dream11 Team Predictions, Fantasy Football Tips For Indian Super League FINAL: Captain, Vice-captain, Predicted XIs For Today's Mumbai City FC vs ATK Mohun Bagan ISL Match at Fatorda Stadium 7.30 PM IST March 13 Saturday

Chansa was brought off with some problem and his replacement Guilherme Felipe de Castro proved to be quite active and curled a shot just wide after doing well to beat Cmovs inside the box. Moments later Adinga (Zodingliana Ralte) won a free-kick which the Brazilian heading Koke’s free-kick just over the crossbar. Moritz looked to spraying through balls but was kept under check perfectly by Mtonga. Just before the half concluded Letzelter picked up a booking for hauling down Felipe in the middle of the field.

The second-half saw Reid bring on his marquee player Freddie Ljungberg replacing Andre Moritz in hope that he will spur them to break the deadlock. NEUFC were once again on top with Durga Boro firing a 30-yard strike just inches over Subrata Paul’s crossbar. Cmovs got himself into the book after delivering a strong tackle on Mtonga.

Just before the hour mark, the visitors stormed into the lead as Koke helped unlock MCFC defence with a neat lob over for Mtonga. The Zambian held off the challenge from Tiago Ribeiro and lobbed the ball over the onrushing Paul to silence the home side. Changes followed from both sides as Seminlen Doungel replaced a tired Adinga, who proved to be a constant menace for Peter Costa on the left wing while Deepak Mondal replaced Tiago for the hosts.

Nearing the final 15 minutes of the match Mumbai City FC suffered a massive blow as Ljungberg hit the deck clutching his hamstring. The Arsenal legend was sidelined for the opening game against Atletico de Kolkata with a calf-injury and the latest setback saw Reid’s team play with 10-men as the former Sunderland manager had sent on Diego Nadaya in place of Nadong Bhutia to use all the permitted substitutions.

Losing Ljungberg was not the only setback that Reid had to see as Cmovs made a needless tackle on James Keene and picked up a second yellow card; leaving Mumbai City FC with a huge mountain to climb. The home team, co-owned by Ranbir Kapoor, tried to find an equaliser but the Highlanders killed off the game in injury time with a neat finish from Felipe; finishing off Keene’s pass, who had beaten Mondal with his neat footwork.

The result enabled NorthEast United FC, co-owned by another Bollywood actor John Abraham, to climb as high as second in the league table. They now play Delhi Dynamos FC in the Jawaharlal Nehru Stadium at the national capital next Wednesday.