Jimmy Neesham was asked to pick his favourite Indian cricketer and to everyone's surprise, neither did he pick MS Dhoni nor Virat Kohli, instead he picked Ish Sodhi as his favourite.

New Zealand allrounder Jimmy Neesham who is extremely popular among his social media fans conducted a live AMA (Ask Me Anything) Instagram session for them. Neesham was asked many questions during the session and he was candid enough to answer them. He was asked to pick his favourite Indian cricketer and to everyone’s surprise, neither did he pick MS Dhoni nor Virat Kohli, instead he picked Ish Sodhi as his favourite. It was witty and must have stumped fans as they must have been expecting a different response. Sodhi is India-born so he fits the bill and Neesham seems to have once again won fans with his response.

Here is the screenshot of it: 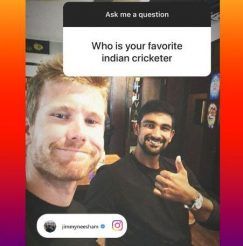 Neesam also made news when a Pakistani actress named Sehar Shinwari proposed the Kiwi cricketer and asked him to be the father of her kids. Neesham’s response there was also epic. The Kiwi cricketer was quick to respond. He was not harsh but in a flirtatious kind of way, saying “I really feel like the emojis were unnecessary”.

Meanwhile, however, there was a moment of controversy for Neesham in the first Ashes Test. Neesham had tweeted, “Rory Burns now has more runs in his first Ashes innings than Virat Kohli has in his entire Ashes career,” after the English cricketer scored an unbeaten 125 on Day 2 of first Ashes Test.

Neesham was a part of the World Cup side which lost to host England in a nerve-wracking finale. Neesham contributed well throughout the tournament. It was unfortunate the manner in which the Kiwis emerged second best as the match was tied after 100 overs and also the Super Over. England won the match on the virtue of boundaries.