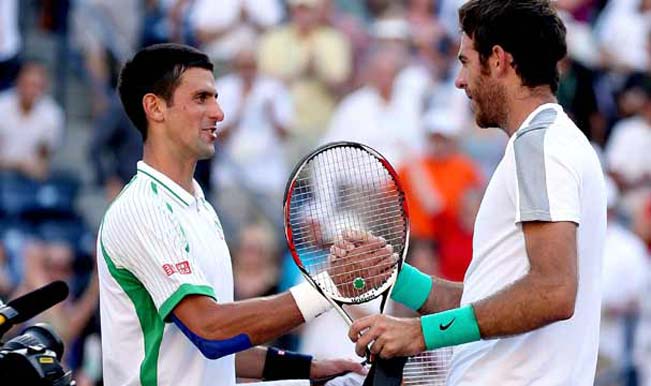 But the world number two progressed the hard way, squandering a 5-2 lead in the third set tie-break before recovering his composure. Also Read - US Open 2020: Novak Djokovic Asks His Fans to Not Abuse Lineswoman After Disqualification

Confident statistics of 18 aces and 54 winners helped lay the foundation for victory and a third round clash with French world number 44 Gilles Simon.

“I should have closed it out in the third set. I had some break point chances and the lead in the tie-break, so I should not have complicated my life in this way, but credit to him,” Djokovic said.

Defending champion Andy Murray handed out a tough Wimbledon lesson to Slovenia’s Blaz Rola, a former US college champion, coasting to a 6-1, 6-1, 6-0 win over a grasscourt rookie playing just the 10th match of his career.

The British third seed eased to victory in just 84 minutes, hitting seven aces and 27 winners against the world number 92 and goes on to face Spanish 27th seed Roberto Bautista Agut.

“It’s his first year on grass so it was tough for him. But he has a good game and he’ll keep improving,” said Murray.

“I took care of my serve for the majority of the match and I played well. If you can finish matches as quick as possible then that’s better in the long run.”

Spanish seventh seed David Ferrer failed in his bid to reach an 18th consecutive third round at a Grand Slam when he was knocked out by Russian qualifier Andrey Kuznetsov.

Ferrer had come into the tournament still suffering the after-effects of the stomach illness which forced him out of the ‘s-Hertogenbosch grasscourt warm-up in the Netherlands last week.

“It’s a disappointment, but it’s not the end of the world,” said the Spaniard.

Also heading for the exit was French Open semi-finalist Ernests Gulbis with the 12th seed losing to Sergiy Stakhovsky of the Ukraine, 6-4, 6-3, 7-6 (7/5).

Stakhovksy, who shocked Roger Federer in the second round in 2013, next faces France’s Jeremy Chardy.

Azarenka, twice a Wimbledon semi-finalist, had only returned to action at Eastbourne last week following a three-month lay-off caused by a left foot injury.

The 22-year-old Jovanovski has reached the third round for the first time and will next face Czech qualifier Tereza Smitkova.

The American, who is the oldest woman left in the draw, stands at an imposing 1.85m (6ft 1in) compared to Nara’s 1.55m (5ft 1n) and the difference in stature — both physical and sporting — eventually told despite the world number 41 breaking early in both sets.

Williams will now face 2011 champion Petra Kvitova in the third round.

Meanwhile, 1997 singles champion Martina Hingis appeared at the All England Club for the first time since 2007 but she and Russia’s Vera Zvonareva lost their women’s doubles opener 6-2, 6-4 to fourth seeds Cara Black and Sania Mirza.