Djokovic faces Giles Muller in the second round of Roland Garros 2015. Find out how to follow and watch the French Open match live online. 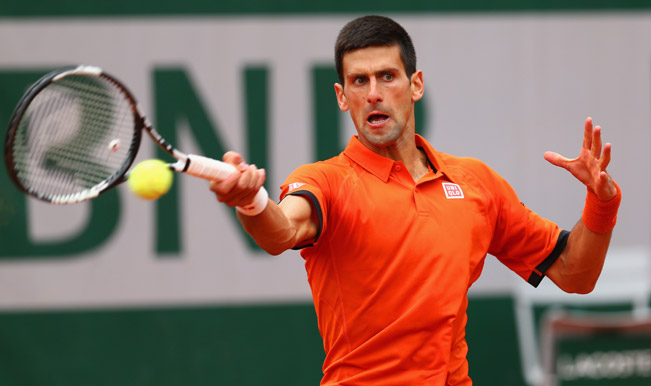 The top seed and World No. 1 Novak Djokovic of Serbia will take on Gilles Muller in the second match of French Open 2015. The match is scheduled to begin at 6.30 pm IST (1 pm GMT, 9:00 am ET) at the Suzanne-Lenglen Court of Stade Roland Garros. Live telecast of the match in India will be on Neo Sports and Neo Prime. UK viewers can watch the match on ITV4. Live streaming services for viewers around the world will be available through ESPN’s official website. Real-time score updates and additional live streaming links will be available on the official website of Roland Garros and Tennis TV. Also Read - Australian Open 2021 Delayed Due to COVID-19, Set to Begin From February 8 in Melbourne: ATP

Djokovic launched his title bid with a fifth win in six matches against Jarkko Nieminen in the first round. The Serbian trumped the 33-year-old Fin 6-2, 7-5, 6-2 to progress into the second round. The eight-time Grand Slam winner is pitted against Gilles Muller, who triumphed over Paolo Lorenzi on Wednesday. The 32-year-old Luxembourgian overcame his Italian opponent following a marathon five-set thriller that stretched to two days. Also Read - ATP Finals 2020 Results: Novak Djokovic Beats Diego Schwartzman in Straight Sets to Begin Campaign With Big Win

The match that commenced on Tuesday saw Lorenzi race into a two-set lead with a 6-4, 6-4 victory. However, Muller registered a stunning comeback to draw level by winning the subsequent sets 7-6, (1), 7-6 (5) in tie-breaker to force a decider. Darkness took over as this game at Court 6, forcing the officials to call for the deciding set to be played on Wednesday. The 55th ranked player clinched the decider to seal his date with the world number one.

Djokovic and Muller faced each other for the first time in the Australian Open with the former emerging triumphant 6-4, 7-5, 7-5 in the fourth round. The Serbian is strong favourite to this battle as a third round clash against Thanasi Kokkinakis awaits the winner. The 19-year-old Australian overcame his compatriot Bernard Tomic 3-6, 3-6, 6-3, 6-4, 8-6 earlier in the day.