33-year-old, Michael Clarke, after finding it difficult to hold his tears back while reading a statement on behalf of Australia cricketers and staff, wrote down a personal message for his little brother. 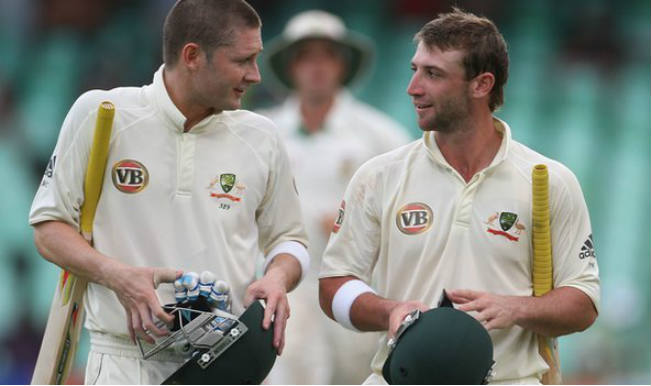 Australian Test cricketer Phillip Hughes would have turned an year older to celebrate his 26th birthday today on November 30 but fate has some other cruel plans in store for the young chap. Hughes who lost the battle against death after being struck by a brutal bouncer during a Sheffield match has left the nation in shock and created a void in hearts of all those who have ever known him – on or off field. Australian captain Michael Clarke is one of those who are still trying to come in terms of this sudden loss from their lives. Clarke emerged as the rock-solid personality during Hughes’s battle for survival and a comforting, dependable shoulders for late cricketer’s family.. Also Read - Aaron Finch Dismisses Michael Clarke's Controversial Claim, Says Test Series vs India Was Played in 'Right Spirit'

33-year-old, Michael Clarke, after finding it difficult to hold his tears back while reading a statement on behalf of Australia cricketers and staff, wrote down a personal message for his little brother. Clarke wrote a personal tribute, “I don’t think in 12 years of playing cricket at the top level I have ever come across a more loyal or generous-hearted teammate,” Also Read - Michael Clarke Rejects Claim he Was Behind Simon Katich's Axing After Dressing Room Altercation

“If he had a tough conversation with a selector he would nod, agree he needed to work harder, grin because he felt bad for the person delivering the message and then get on with it. You knew deep down he was shattered because playing cricket for his country meant everything to him. That his career, and his life, was cut short in his prime is incredibly unfair.”

“I don’t have a blood brother, but I am very proud to have called Phillip my brother. I am a better man for having known him. Vale Hugh Dog. I will miss you forever, but I will not forget. Happy birthday bro.”

Clarke almost tweeted like  a countdown to Phil Hughes birthday. He wished him on Twitter and wrote how much he will be missed.

Happy bday bro. Will love you forever. It has been the hardest few days of my life.

Phillip’s tragic death while doing something he loved the most – on cricket pitch while batting at 63 for South Australia and plundering his opponents New South Wales during a Sheffield Match. One still has to come in terms of the fact that his life was cut short in that deadly minute with a speedy, catastrophic bouncer from pacer Sean Abbott hit his head that led him to death two days later on Thursday – three day before his 26th birthday!