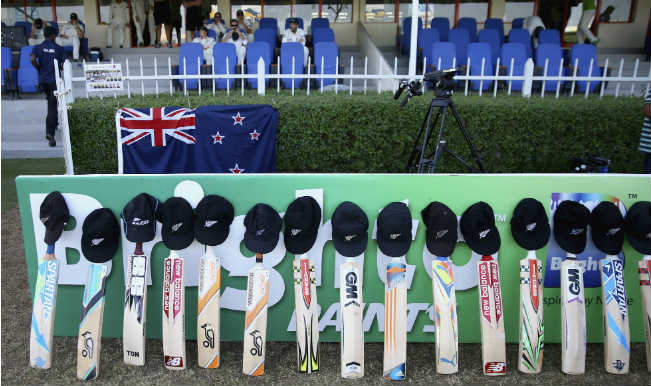 Sharjah: Pakistan and New Zealand teams and officials on Friday observed a minute’s silence and wore black armbands to join the world in mourning young Australian batsman Phillip Hughes. Hughes, 25, died Thursday from a rare head injury after a devastating on-field blow in a first-class match in Sydney, leaving the whole cricketing world in a shock. Also Read - From Lebanon to Palestine, Muslims Stage Anti-France Protests as Anger Against Prophet Cartoons Rises

Pakistan and New Zealand teams abandoned the second day’s play in the third and final Test on Thursday after the tragic news of his death as a mark of respect. Before heading out on Friday, the New Zealand players placed their bats outside the team’s dressing with their national black caps on them to join the “#putoutyourbats” campaign launched in Australia to pay tribute to Hughes. Also Read - Pakistan Minister Admitting Involvement in Pulwama Attack Reveals Truth, Says Rajnath Singh

Hughes played his last international match in Abu Dhabi, the third and final one-day against Pakistan in October, in which he made five. The second day’s play in the third and final Test between Pakistan and New Zealand resumed on Friday with Pakistan starting their first innings at 281-3. Pakistan lead the three-match series 1-0 after winning the first Test in Abu Dhabi and drew the second in Dubai.