Opener Tom Latham scored his second successive hundred to guide New Zealand to 243 for three on the opening day of the second Test against Pakistan in Dubai on Monday. 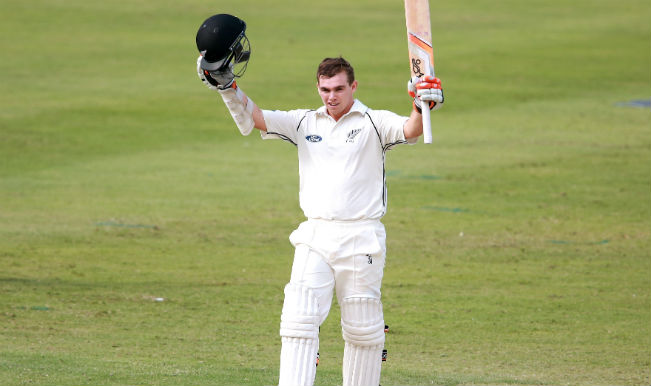 Dubai: Opener Tom Latham scored his second successive hundred to guide New Zealand to 243 for three on the opening day of the second Test against Pakistan in Dubai on Monday. The 22-year-old followed his 103 in the first Test with another confident unbeaten 137 to help his team cash into the early advantage of winning the toss and opting to bat on a flat and grass-less Dubai stadium pitch. Also Read - Long March 5B, Chinese Rocket Debris Likely To Hit Earth In Next 24 Hours

When bad lights forced closure three overs before schedule, Corey Anderson was seven not out on a day dominated by left-handed Latham. Latham put on a resolute 77-run stand for the opening wicket with Brendon McCullum (43) and another 76 for the second wicket with Kane Williamson (32). He then added 73 for the third wicket with Ross Taylor who was caught at short cover off leg-spinner Yasir Shah after scoring 23. Also Read - Amazon to Add Pakistan to Its Approved Sellers' List. Here's What it Means

Latham, playing only his sixth Test, hit Zulfiqar Babar for a six to reach 90s and after hitting a boundary off the same bowler took a single to complete his century off 192 balls. New Zealand batting coach Craig McMillan praised Latham. “Obviously an exciting day for us,” said McMillan. “He (Latham) has come through in an excellent manner and backed up his first Test hundred to prove that he is an exciting talent.”

“If we can continue to bat like this and put a 450-plus total then we can put pressure on Pakistan, like they did on us in Abu Dhabi.” Pakistan, missing a fifth bowler after Mohammad Hafeez was left out due to a hamstring injury, toiled hard and to add to their woes did not hold their chances.

Azhar Ali let off Latham in gully when the batsman was 103 and also grassed Taylor on 11 — both off Babar. Latham, who impressed in the first Test, once again showed grit and application during his 375-minute stay, hitting 11 boundaries and a six. Babar broke the stubborn second wicket stand when he turned one across Williamson’s bat and hit the off stump. Williamson hit only one boundary during his patient 86-ball knock.

In the first session Pakistan had to toil hard for wickets with Latham and McCullum batting confidently. McCullum took the attack to the bowlers, hitting four boundaries and two sixes during his 69-minute stay at the crease. He was dismissed just before lunch, pulling straight into the hands of deep square-leg where Shan Masood held a regulation catch. Latham survived a leg-before review off Ehsan Adil when on 11, but thereafter batted with confidence.

New Zealand, trailing the three-match series 1-0, kept the same side which lost in Abu Dhabi last week. Pakistan were forced to play with a new opening pair after Ahmed Shehzad was ruled out of the remaining two Tests with a skull fracture, and Hafeez suffered a hamstring injury. They were replaced by Masood and Taufeeq Umar while paceman Imran Khan was rested and made way for Adil. The third and final Test will be played in Sharjah from November 26.