Watch the live cricket streaming and telecast of the third Test, day Four between Pakistan and New Zealand at at the Sharjah Cricket Stadium in Sharjah on Sunday. 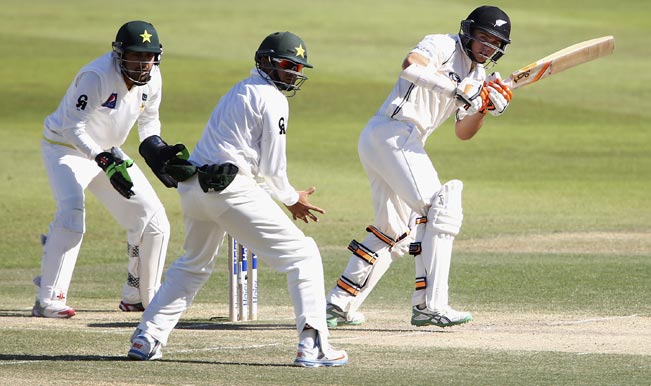 Watch the live cricket streaming and telecast of the third Test, day Four between Pakistan and New Zealand at at the Sharjah Cricket Stadium in Sharjah on Sunday. Pakistan is at dire straits following five quick wickets by New Zealand in the second innings, leaving the hosts reeling at 63 for five. The match is set to start at 11:30 am IST (10:00 am local time) and live telecast in India will be on Ten Cricket and Ten HD. Live streaming links will be available on Ten Sports’ official website. Viewers based in Pakistan can stream the match online at PTV Sports’ official website. Also Read - Pakistan Fails to Comply on 6/27 Points on Action Plan, to Remain on Terror-Financing Watchdog FATF’s Grey List

After bowling out Pakistan for 351 in the first innings, courtesy a seven-wicket haul by young off-spinner Mark Craig, New Zealand piled on 610 runs. The total was set up due to big scores by Brendon McCullum and Kane Williamson. Ross Taylor, Corey Anderson, Tim Southee and Mark Craig too scored a half-century each. Yasir Shah and Rahat Ali finished with five wickets each. Also Read - India Pushes For Pakistan to Remain on FATF Grey List, Says Pak Continues to be Safe Haven for Terrorists

Despite the sad demise of Phillip Hughes, which left a huge emotional dent on the players who have been a part of this match, they have continued with the game in the right spirit. Day Two was postponed as a mark of respect for Phillip Hughes.