Pakistan vs New Zealand 2014 3rd Test, Live Cricket Score and Updates of Day 2 at Sharjah: NZ finish at 249/1 at stumps

Catch the Live Updates and score of the 3rd Test between Pakistan and New Zealand here. 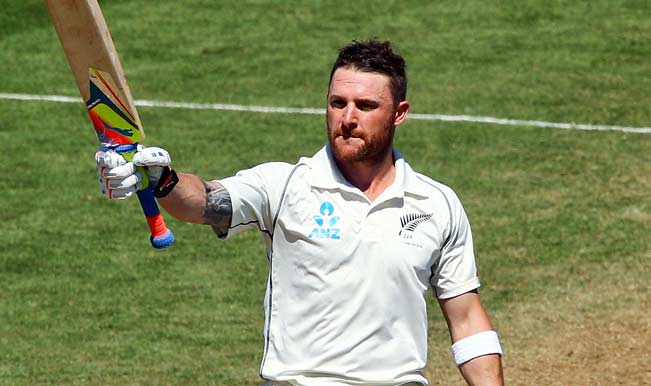 New Zealand end the day like they begain — with authority as Mark  Craig ran through the Pakistan batting order to dismiss them cheaply and it has been a McCullum show from thereon. What a knock! Smashing the bowlers around like pub bowlers, McCullum has now brought up his 150 and looks poised to do what Mohammad Hafeez failed to do in the first innings. Kane Willamson got unnoticed but has raced along to 77 and is also set to put his poor run of scores with a century. Total Kiwi domination on Day 2. Also Read - After Almost Being Covid-19 Free, New Zealand Records First Coronavirus Death in More Than Three Months

McCullum’s carnage has continued after Tea and New Zealand are on their way to wiping out the deficit by the end of the day’s play. The strokemaking has been such a delight to watch. He has struck eight sixes so far and many of those big hits involved him coming down the track, playing with the turn and walloping the ball into the stands. Kane Williamson’s contribution should not be forgotten as New Zealand’s usually reliable No 3 has been equally solid and is in his sixties now.

Brendon McCullum reaches his hundred and it has taken just 78 balls — it’s one of the fastest Test hundreds of all time and a scintillating innings. Williamson has lent good support and has raced to 44. The last ball of the Tea break saw McCullum dab the ball to extra cover and punch the air, much to the delight of his bench to bring his century.

New Zealand have simply turned the tables on Pakistan here and Brendon McCullum has clubbed the bowlers tom all parts of the ground and in some style too. The fielders have been stationed in the deep, but the ball still finds the boundary ropes with ease. Fours, sixes simply are raining here and Williamson is also looking fluent at the crease. Mohammad Talha bore the brunt of the Kiwi skipper’s aggression as he walloped three consecutive boundaries. the length was short and McCullum gave the bowler a pasting. He is edging towards his century here.

McCullum has blazed away to a fifty and it has come of just 30 balls. After carting the slow bowlers for big sixes across the ground, the skipper lays into the pacers and more boundaries flow off his blade. The score is moving along rapidly, at 6.5 runs per over to be precise and Kane Williamson has also settled in well. Meanwhile Tom Latham was removed by Rahat from a delivery that shaped away from the batsman. T Latham c Sarfraz b Rahat Ali 13 (32)

Brendon McCullum has come out and blazed away and Tom Latham is settling in as well. The gaps are being found at will and the visitors are looking rather comfortable at the crease. The spin menace for New Zealand so far, Zulfiquar Babar came into the attack and the skipper romped back and smacked him for a six over deep mid wicket. The next delivery was cut away for a boundary but the highlight of the over was McCullum stepping down the wicket and hammering it over long-on and into the empty stands. Flying start.

That’s seven for Mark Craig! Yasir Shah is was looking good and struck a few handsome boundaries before his dismissal. Just then, Yasir Shah carelessly prods the ball to first slip and it’s Ross Taylor again with a smart catch. Pakistan are bowled out and Craig registers the best ever bowling figures at the Sharjah Ground. The Kiwi off-spinner finishes at 7 for 94. Yasir Shah c Taylor b Craig 25 (65)

Mark Craig takes a five-for here. The Pakistan batsmen are adept at spin and the Kiwi off-spinner has been a touch expensive at times. What Craig has is heart and is never afraid to toss the ball up to the batsmen. Pakistan have thrown their advantage away here as wickets continue to tumble. First, Mohammad Talha nicks one to Tom Latham at short-leg and Rahat Ali’s nervous prod is taken by Ross Taylor at first slip and it the former New Zealand captain’s 100th catch in Test cricket and Mark Craig’s sixth. M Talha c Latham b Craig, Rahat Ali c Taylor b Craig 0 (13)

Pakistan went quiet after the loss of two quick wickets. It was all about building from there on and who better than the new hero, Sarfraz Ahmed. Just when I say that, the Pakistan wicketkeeper attacks and gets a couple of boundaries. Mark Craig comes back well after being swept for four. The Kiwi off-spinner saw the batsman coming forward and bowls a quickr one through the air and Sarfraz can only nick the ball to the keeper. Sarfraz Ahmed c Watling b Craig 15 (24)

Oh Mohammad Hafeez, what have you done? Everything was going well and we were just about to brace ourselves for the double hundred. Ish Sodhi bowls it slightly short and the opener romps back on his backfoot and pulls the ball to the deep. Alas, Brendon McCullum had kept a man at deep midwicket and Hafeez just walked right into the trap. Just then, Asad Shafiq falls and it’s such a soft dismissal. Trying the sweep off Mark Craig, he scoops the ball straight to Ish Sodhi at square leg. M Hafeez c Boult b Sodhi 197 (316), A Shafiq c Sodhi b Craig 11 (39)

Hello and Welcome to updates of Day of the 3rd Test between Pakistan and New Zealand. R.I.P Phil Hughes. While the new from Australia shocked the cricketing world, here are their Trans-Tasman rivals doing their bit and getting off to a good start. New Zealand have got an early breakthrough and it’s Tim Southee who has struck. Misbah’s hard work early on is cut short and he ends up edging the ball to the ball to the keeper. Hafeez, meanwhile is batting on and is edging closer to his double hundred. Misbah-ul-Haq c Watling b Southee 38 (120)

Pakistan skipper Misbah-ul-Haq won the toss and elected to bat first. Openers Mohammad Hafeez and Shan Masood got off to a good start, putting up 44 runs for the first wicket. Hafeez continued in brisk form despite the fall of Masood’s wicket. Runs were drying up from the other end even as Hafeez went on to slam a brilliant century. He remained unbeaten on 178 at the end of Day one, with skipper Misbah-ul-Haq giving him company at the other end, batting on 38.

Day two was suspended after Australian batsman Phillip Hughes passed away following an injury on his head due to a bouncer. As a mark of respect the two teams didn’t take the field and the match will be extended by another day.