Pakistan lost Shan Masood and Taufeeq Umar as they ended second day on 34 for two in 19 overs after the visitors were bowled out for 403. 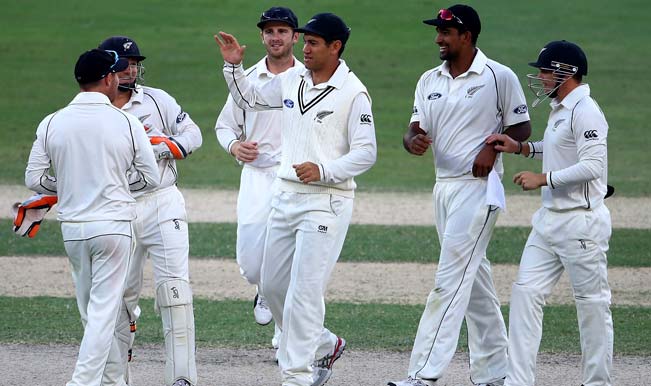 Dubai, Nov 18: Pakistan stuttered to 34-2 on a turning pitch after New Zealand’s tailenders batted spiritedly and posted 403 on the second day of the second Test here today. Leg spinner Ish Sodhi clean bowled Shan Masood for 13 and offspinner Mark Craig cut short Taufeeq Umar’s comeback to Test matches after two years when he had him stumped on 16 just before the end of the day’s play. Pakistan were forced to draft in new opening batsmen as the in-form Ahmed Shehzad and Mohammad Hafeez were injured during the 248-run victory in the first Test last week. Also Read - Chinese Rocket Re-Enters Earth, Debris Lands in Indian Ocean West Of Maldives

But with the track showing ominous signs of turn, Masood and Umar struggled to cope against spinners before perishing late on the second day. Azhar Ali was unbeaten on 4 while Younis Khan, who has four centuries in his previous six Test innings, will resume on 1. New Zealand were in danger of losing the initiative when it lost century-maker Tom Latham (137) and Corey Anderson (9) inside the first three overs in the morning after they resumed at 243-3. Also Read - Long March 5B, Chinese Rocket Debris Likely To Hit Earth In Next 24 Hours

But Craig, dropped twice, and BJ Watling pinched Pakistan with a 68-run seventh-wicket stand, then Sodhi (32 not out) guided New Zealand to 400 with a straight six off Pakistan’s most successful bowler, Zulfiqar Babar, who took 4-137. Pakistan captain Misbah-ul-Haq was rewarded when he turned to Azhar, and the part-time legspinner immediately broke the two-hour, Watling-Craig partnership by having Watling caught at backward point on 39.

Craig made a defiant 43 off 110 balls with five fours before he missed Babar’s short delivery and was out leg before wicket as New Zealand lost both set batsmen in successive overs and reached tea at 369-8. Pakistan had their chances to limit New Zealand, as Rahat Ali should have dismissed Craig on 9 just before lunch, but couldn’t judge a high ball off a slog sweep and dropped a simple catch at mid-on. Craig got another reprieve on 13 in the first over after lunch when wicketkeeper Sarfraz Ahmed didn’t attempt a low catch to his left off Ehsan Adil (2-73). Earlier, right-arm fast bowler Adil also met with immediate success off his fourth delivery of the morning when Anderson played an uppish drive off a full-pitched delivery and was caught in the covers.

Latham, who batted beautifully throughout the first day, followed in the next over when left-armer Rahat found the outside edge off a full-pitched delivery and Ahmed took a regulation catch behind the wicket. Latham hit 11 fours and a six in his second successive century of the three-Test series. Neesham hit two straight boundaries off Adil on either side of the wicket in scoring 17, but struggled against the spin of Yasir Shah (2-92) and Babar on the slow-turning track. He eventually spooned a catch to Misbah at short midwicket.