Both sets of players along with the match officials lined up to observe a minute's silence in honour of Hughes. 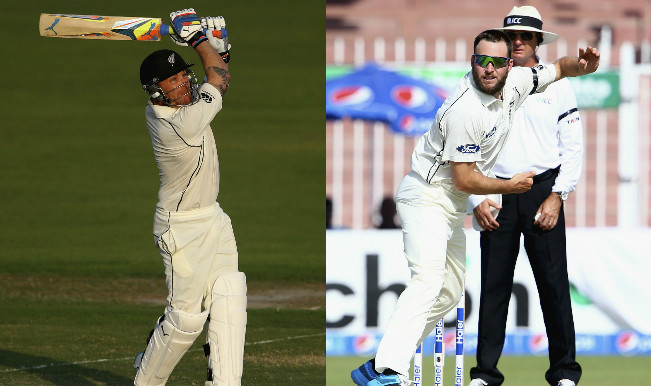 After day two of the third Test between Pakistan and New Zealand was suspended as a mark of respect following the demise of Phillip Hughes, the play resumed today and was considered as day two. Continuing on a score of 281 for 3, Pakistan were restricted to 351 as spinner Mark Craig impressed by scalping seven wickets. In reply, Captain Brendon McCullum propelled New Zealand off to a grand start, courtesy his unbeaten ton. At stumps on day two, New Zealand finished at 249 for 1, trailing by 102 runs. Here are the highlights of the second day’s play. Also Read - New Zealand Reports 4 New COVID-19 Cases

One minute silence: Both Pakistan and New Zealand players along with the match officials lined up to observe a minute’s silence in honour of Hughes. Both teams sported black arm-bands throughout the day to mourn Hughes’ death. Also Read - After Almost Being Covid-19 Free, New Zealand Records First Coronavirus Death in More Than Three Months

Misbah ul Haq falls early: Pakistan skipper had a brief stay as he was removed by Tim Southee. Looking to defend, Misbah edged one to keeper BJ Watling, who completed a diving catch.

Hafeez misses double ton as Craig runs through Pakistan batting order: Mohammad Hafeez, who with flair scored runs on day one, fell short of his double hundred by just three runs. On 197, Hafeez threw his wicket away as he pulled a short delivery off Ish Sodhi straight to Trent Boult at deep square-leg. After his dismissal, Pakistan lost last five wickets for just 40 runs. All the five wickets to fell were spinner Mark Craig’s victims. Craig on day one scalped two wickets and with five more wickets he finished with figures of 7 for 94, his maiden five-for in his Test career.

Tom Latham dismissed but Brendon McCullum off to a flyer: Openers Tom Latham and Brendon McCullum put up a fifty partnership in no time, but it was McCullum’s bat which yielded most runs. Kiwi skipper looked in sublime touch as he started off throwing caution to the wind with Latham being a mute spectator at the other end. Rahat Ali then provided Pakistan with the breakthrough and the lone success of the day, when he removed Latham for 13. However, Latham’s dismissal did not peg McCullum back, as he scored his half-century off just 30 balls.

Brendon McCullum’s ton puts New Zealand in driving seat: It took McCullum only 78 balls, the fastest in New Zealand’s Test history, to reach his 10thTest ton. It was an absolute carnage out there with McCullum tearing apart the inexperienced Pakistan attack. He was well supported by Kane Williamson, who notched his fifty and the two stitched an unbeaten 198-run stand for the second wicket before play on day two ended. McCullum is unbeaten on 153 while Williamson batting on 76.