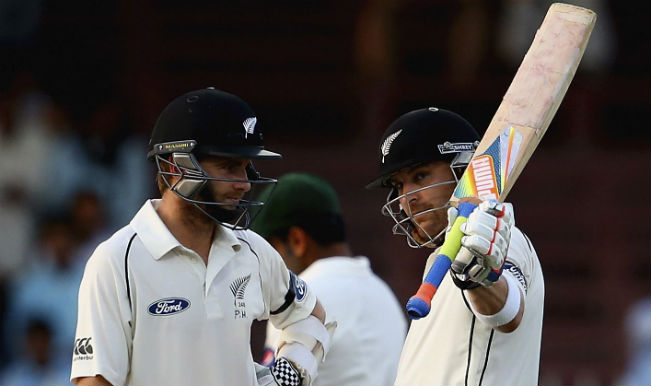 Capitalising on a solid start, New Zealand continued to hammer Pakistan bowlers on day three of the Sharjah Test. New Zealand, at close of play on day three are 637 for 8, leading by 286 runs. Day three saw Brendon McCullum complete his double ton and Kane Williamson scoring his century as well and made sure it is advantage New Zealand all the way. Here are the highlights of the day’s play, which was mainly dominated by Kiwi batsmen. Also Read - As India Boosts Security at LoC, Pakistan’s ISI Tells LeT and Hizbul chiefs to Push Militants into Valley

Milestones and records: It was a day of records for New Zealand as Brendon McCullum and Kane Williamson showed no mercy towards the Pakistan bowlers. First Williamson, who resumed on an overnight score of 76, notched his 8th Test ton and then skipper McCullum got to his double ton off just 186 balls, the fourth-fastest in Test cricket. As the two batsmen progressed towards their respective milestones, their partnership also stretched past 250. Eventually, the two were separated when Yasir Shah bowled McCullum after the batsman got to his 4th double ton, the most by a New Zealand batsman. McCullum and Williamson’s stand for the second wicket was worth 297, highest second-wicket partnership for New Zealand in Tests. Also Read - Safdar Awan, Nawaz Sharif's Son-in-law, Arrested in Karachi After Wife Maryam's Fiery Speech

Kane Williamson and Ross Taylor take Kiwis past 400: After McCullum’s dismissal, Ross Taylor joined well-set Williamson in the middle and the two kept the good work going by stitching a hundred-run stand for the third wicket. Courtesy Williamson-Taylor stand New Zealand crossed 400-run mark. Yasir Shah once again provided Pakistan with breakthrough when he removed Taylor on an individual score of 50, his 23rdTest fifty and New Zealand score read 464 for3.

Kane Williamson misses double ton: 24 year old right-hand batsman Williamson was unfortunate to miss out on what could have been his maiden double ton. He was dismissed on 192 off the first ball after tea when Rahat Ali had him caught in the slip.