Paris Saint-Germain (PSG) lifted the Ligue 1 trophy for the third time in a row, while Lyon secured a berth to next season's Champions League in France's top-flight football league's penultimate round of the 2014-15 season. 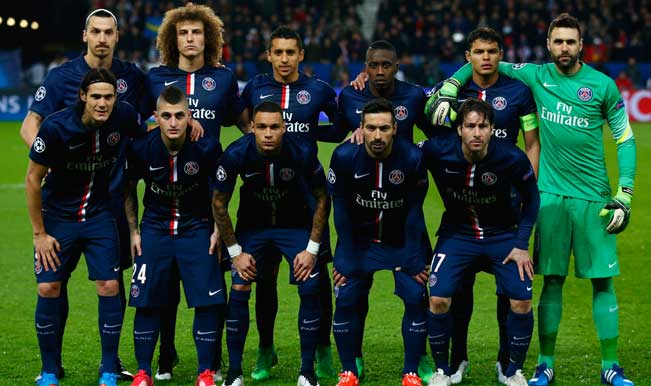 Paris, May 17: Paris Saint-Germain (PSG) lifted the Ligue 1 trophy for the third time in a row, while Lyon secured a berth to next season’s Champions League in France’s top-flight football league’s penultimate round of the 2014-15 season. Laurent Blanc’s side claimed a 2-1 victory at Montpellier on Saturday to pile up 80 points, eight more than their nearest challengers Lyon, who were held to a 1-1 draw at home by Bordeaux, reports Xinhua. Also Read - Gonzalez Calls Neymar Trash as Bitter Feud Continues After PSG Beat Marseille 2-1 to Lift Trophee des Champions

Behind the top two, Monaco, with 68 points after a 2-0 win hosting relegated Metz, Marseille and Saint-Etienne, both at 66, are fighting for the third place to win a spot in the third qualifying round of the Champions League. Needing only a point to retain the title, PSG made no mistake at the Stade de la Mosson stadium though they played without injured top scorer Zlatan Ibrahimovic and suspended midfielders Thiago Motta and Marco Verratti. Also Read - Indian Restaurant in UK Attempts to Send Samosa Into Space, it Crash-lands in France

Blaise Matuidi opened the scoring in the 17th minute after collecting a superb pass from Adrien Rabiot and slotting into the bottom-right corner. Ezequiel Lavezzi swept in Serge Aurier’s right-wing delivery at the near post to double the visitors’ advantage on 26 minutes, before Athony Mounier pulled one goal back for the hosts shortly before halftime.

PSG’s defence was rarely tested in the second half, but risked a crowd trouble as the visiting supporters launched flares onto the pitch to interrupt the encounter for a while. With the victory, PSG sealed the second trophy of a potential domestic treble.  After pocketing the league title and the League Cup, which they won last month against Bastia, PSG take on second division Auxerre in the French Cup final on 30 May.

Enzo Crivelli granted Bordeaux a third-minute lead against Lyon. Lyon levelled the match through Nabil Fekir in the ninth minute. Marseille won 4-0 at Lille, and Saint-Etienne beat Evian 2-1 to relegate the hosts.