Australian batsman Phillip Hughes passed away on Thursday morning at a local hospital in Sydney after his family decided to remove the life-support system. Hughes was in induced coma for over two days after being hit by a bouncer by Sean Abbott in South Australia's Sheffield Shield clash against New South Wales earlier in the week. 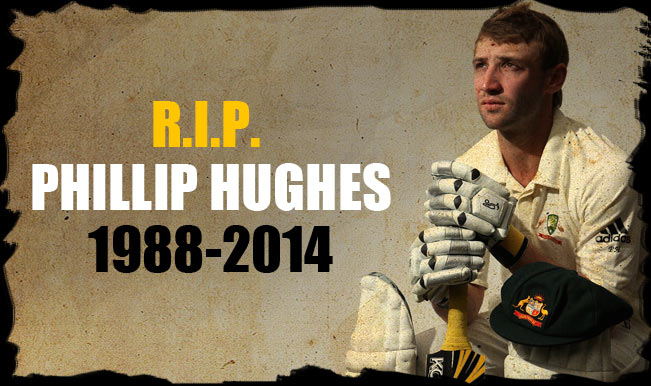 Australian batsman Phillip Hughes passed away on Thursday morning at a local hospital in Sydney after his family decided to remove the life-support system. Hughes was in induced coma for over two days after being hit by a bouncer by Sean Abbott in South Australia’s Sheffield Shield clash against New South Wales earlier in the week. The death of the Australian batsman comes as a huge shock to the cricketing world as fans and cricketers have come out to offer their condolences to the young batsman. Also Read - Australia Announce 19-Man Squad For South Africa Tests; Matthew Wade Dropped While Alex Carey Gets Maiden Call-up

He blossomed, only to wither away soon. Phil Hughes’s career was all about early promise. The promise started when he became the youngest to score a century in a Pura Cup final, the youngest to score two centuries in the same Test and the one to start his limited-overs career in international cricket with a ton. But, much like Archie Jackson, the promise died soon, literally. Also Read - India vs Australia: David Warner Ruled Out of Boxing Day Test in Melbourne

Hughes was no painter with the willow. He wouldn’t caress the ball through gaps; he wouldn’t please you with artistry. Hughes was more of a child with a crayon. You wouldn’t know which side of the page the stroke would go. He was unorthodox, nonetheless effective.

From being a grafter, he was showing signs of being a good T20 batsman. He had moulded himself well to suit to the demands of the ever-changing game. When there were questions over his ability to play bounce, he struck two centuries against an attack comprising of Makhaya Ntini, Dale Steyn and Morne Morkel at Kingsmead in Durban. After his failure in the Test series against India, there were apprehensions over his ability to counter spin. He responded with a fighting century against Sri Lanka in Colombo.

In 2009, Hughes was awarded the Bradman Young Player of the Year, followed by State Player of the Year four years later by Cricket Australia. Yet, he was to fully live up to his potential at the international level. A heavy scorer in domestic cricket, his exploits at the highest level came amid large spacing of single-digit scores. However, when he did stand up, it was against all odds; while the rest of his teammates had succumbed against the brilliance of the opposition batting.

The unbeaten knock of 81 against England at Trent Bridge is a testimony to his brilliance and the best way to define his career. Even as he stood tall among a collapsing line-up, taking Australia from 117 for nine to 280, a certain Ashton Agar took the sheen away. To make things worse, Australia lost the Test by a narrow margin of 14 runs.

Simple and humble, Hughes called it a day way too early. He didn’t leave in style; he left in shock. Doubts lingered over the safety standards in the game. In midst of all the questions and apprehensions, cricket lost and so did his teammates and rivals – a simple and humble being. On a cricket pitch, he lived his life. On a cricket pitch, he last lost his consciousness. May his soul rest in peace