Sports is a parallel life they say, but certain tragedies only bring back to reality what really is – a life beyond sports. Hughes’ unfortunate death has come as a cruel reminder to those who drew that parallel. 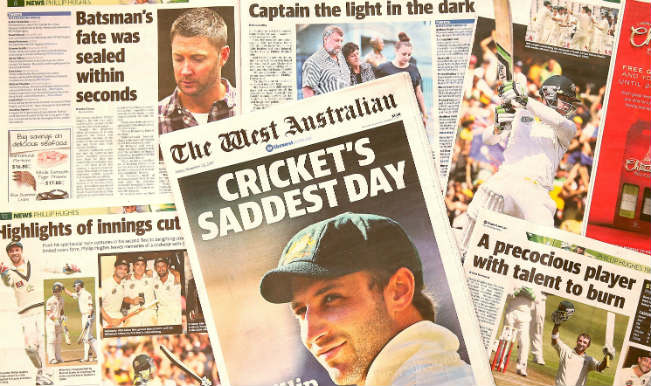 Sports is a parallel life they say, but certain tragedies only bring back to reality what really is – a life beyond sports. Hughes’ unfortunate death has come as a cruel reminder to those who drew that parallel. Yes, sports does teach you a lot, teaches you life lessons in the most enjoyable of ways. But that is where it stops. Also Read - English Commentator Draws Flack Over His Comments on Sean Abbott, Referencing Phillip Hughes' Death

Brendon McCullum refused to celebrate in Sharjah after scoring the quickest Test century by a Kiwi. Michael Clarke couldn’t control from breaking down while addressing the media in Sydney. The emotions spoke for what the world of cricket had come to following the untimely demise of Phillip Hughes. Death has numbed senses, stolen a bit of energy from the sport; and respectfully shown that cricket is still a gentleman’s game. Also Read - India vs Australia 2018: Steve Smith, Mitchell Johnson, Michael Clarke, ICC Lead Tributes in Memory of Phil Hughes

The incident has been handled with great sensitivity and dignity so far, with support and affection reaching out very respectfully to Phil Hughes’ family. The bats have been put out; the media has respected the privacy of those close to him. But in all emotions, there have been some overboard reactions.

Hughes’ injury on the head raised questions over the safety of the game, over the standards of protection it has in place. But it is naive to say that sports can survive with complete protection.

Cricket, with no amount of protection, can be completely risk-free. It can be minimised. In case of Raman Lamba and Mark Boucher, it could’ve been avoided; but the Hughes incident proved that cricket can never be completely safe.

Like Hughes’ helmet manufacturer had said, a gear made to protect the region where the left-hander was hit, will only restrict the movement of the batsman’s neck. Technology will advance to make cricket safer, but it is highly unlikely that it can make it risk-free. What about a shot hit straight back at the bowler? (Remember Inzamam-ul Haq and Nantie Hayward?)

As much as the incident is tragic and emotional, there have some bizarre reactions. One of them has been a call for the ban on bouncers. Not having personally felt the pain of one, I would like to quote Nari Contractor on this, “If that (banning of bouncers) is done, it will take away the beauty of Test cricket.” Hurt and pain are a part and parcel of the game. The ability to withstand agony and show resilience is often what serves as a hallmark for great sportsmen.

There is another thought, coming from former cricketers and fans that after the cancellation of the tour game, that Australia should go into the first Test with 10 men and the scoreboard reading 0/1 as a mark of respect for Hughes. As much as the incident was unfortunate and arguably the most devastating one on a cricket field, cricket has to go on.

Yes, emotions need to get the better of rationale and it is understandable when it does in times like these, but cricket needs to get back to normalcy. Counselling and comforting those affected by the incident, better protective measures in the game and cricket can go on. It will in no way mean that Phillips Hughes’ death hasn’t created a void in the game; it will in no way mean that he has been disrespected. Respect is silent, but it is there. In memory and cricket, he will forever be remembered.