The Indian contingent was represented by team manager Shastri, Rohit and Virat Kohli,. 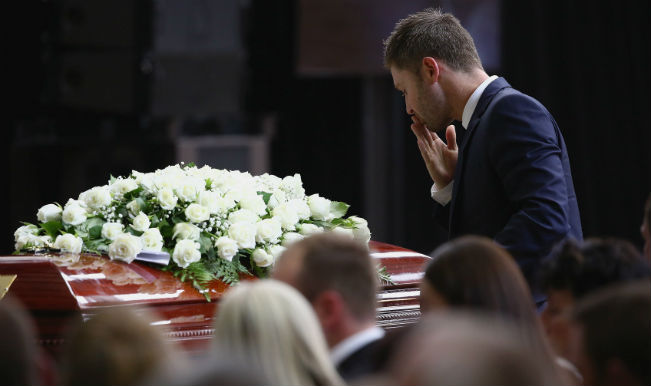 Macksville (Australia), Dec 3 Eyes welled up all around and mourners, including Australian skipper Michael Clarke, broke down while reading out heart-rending tributes to the late Phillip Hughes, who was laid to rest in his home town. In a funeral attended by thousands and televised live, friends, family and teammates paid their tributes to the young batsman, who died after being hit on the head by a bouncer during a domestic game last week. The Indian team, which is here for a Test and limited-overs series, was represented by captain Virat Kohli, batsman Rohit Sharma and Team Director Ravi Shastri during an emotional goodbye to the player, who would have turned 26 the previous Sunday. Also Read - Who Should be Australia Test Captain After Tim Paine? Michael Clarke Picks Pat Cummins

Indian Prime Minister Narendra Modi also joined the world in bidding farewell to Hughes, sending out a tweet to pay his last respects. Heart-rending funeral in Australia. Phil Hughes, we will miss you. Your game & exuberance won you fans all over! RIP,” Modi tweeted. Also Read - Michael Clarke Says 'India Can Celebrate For a Year if They Can Beat Australia Without Virat Kohli'

Elton John’s “Don’t Let the Sun Go Down on Me” filled the air as Hughes’ coffin was led out after the tribute ceremony for a procession around the streets of Macksville to allow people to pay their last respects. The singer had paid tribute to Hughes at his concert in Munich last Thursday. “The procession moved through the streets with players and other mourners walking behind. The Australian players later formed a guard of honour and the hearse and the funeral procession moved past them en route to the burial.

The coffin was carried from the prayer hall of the Macksville High School by pallbearers — Phillip’s father Greg and brother Jason, along with Michael Clarke, Mitchell Lonergan, Matthew Day, Aaron Finch and Tom Cooper, who was the departed player’s housemate in Adelaide and was batting with him when he was struck by the fatal delivery.

The prayer service at the school was led by Father Michael Alcock and mourners were left wiping tears as touching tributes were read out by Hughes’ siblings, friends and Clarke.

“I don’t know about you, but I keep looking for him. I know it is crazy but I expect any minute to take a call from him or to see his face pop around the corner. Is this what we call the spirit? If so, then his spirit is still with me. And I hope it never leaves,” a choked Clarke said.

“I walked to the middle of the SCG on Thursday night, those same blades of grass beneath my feet where he and I and so many of his mates here today have built partnerships, taken chances and livered out the dreams we paint in our heads as boys,” added Clarke, who called Hughes his little brother.

“He always wanted to bring people together and he always wanted to celebrate his love for the game and its people. The bonds that lead to cricketers from around the world putting their bats out, that saw people who didn’t even know Phillip lay flowers and that brought every cricketing nation on Earth to make its own heart felt tribute.”

“Rest in peace my little brother, I’ll see you out in the middle,” concluded Clarke, breaking down in tears.

“His journey from the backyard to baggy green cap 408 personified the Australian cricketing dream. Cricket’s heart has been pierced by pain but will never stop beating. It will find its rhythm next week in Adelaide, and beyond…Phillip Hughes, forever unconquered on 63.”

The youngster’s siblings also read out emotional farewell letters to him.

“I am so honoured to call you my brother, my best friend and my hero … Your presence will never leave the people who love and adore you … I will always remember and admire that you never changed or became someone different while your life and career was progressing,” said his sister Megan.

“I couldn’t have asked for a better little brother. From a very young age you were destined to be our rock-star … I still can’t believe I’m here saying my final goodbyes … I will cherish our childhood memories forever. Our backyard cricket matches were incredible. You always had to win, and would keep batting on for days,” added his brother Jason.

Australian Prime Minister Tony Abbott were among the notable people who walked alongside the locals and friends of the Hughes family.