The funeral is scheduled to take place at 8.30 am IST (3 .00 am GMT, 2.00 pm Australia Time) in the sports hall at Macksville High School with the live coverage by Channel 9 in Australia. 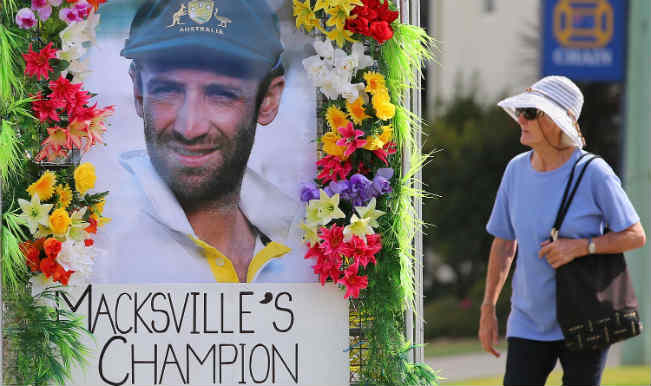 On December 3, Wednesday, the entire cricketing world would come to a standstill with their eyes on one place in world map – Macksville a small town in New South Wales, Australia. The reason for this coming together is to bid final goodbye to their proud son – 26-year-old, Australian cricketer, Phillips Hughes. His funeral will take place on Wednesday in Macksville in the presence of more than 5000 individuals coming to pay him last tributes after he died on November 27, Thursday. The funeral is scheduled to take place at 8.30 am IST (3 .00 am GMT, 2.00 pm Australia Time) in the sports hall at Macksville High School with the live coverage by Channel 9 in Australia. The viewers from around the world can catch the live streaming and telecast of Phillip Hughes’ funeral online on Official Website of Cricket Australia or Cricket Australia Live App and StarSports.com Other than Channel Nine, Seven and Ten Network’s, ABC TV and also pay-TV channel Sky News will offer live coverage of the funeral on Wednesday afternoon. Also Read - 4th Test, IND vs AUS: Ricky Ponting Explains Why Has Been Left Shocked After India's Historic Win At Gabba

Phillip Joel Hughes (1988-2014), who breathed his last on November 27, a ‘country boy’ hailing from Macksville, New South Wales, was full of life. Hughes was man who dreamed big and was not someone who gave into negativity. Even in his final ‘living minutes’ before the fatal bouncer struck him; Hughes was batting at Sydney Cricket Ground to get his berth back in the national side. Batting at 63, he went for the pull shot fearlessly against a speedy delivery before he missed it and went on to hit the vulnerable spot at back of his neck. He showed courage to remain standing till he finally gave in and collapsed on the cricket pitch. Phillip Hughes never regained conscious from that killer blow. Hughes died from bleeding on the brain, two days after being knocked unconscious by a bouncer in Sydney, throwing the cricketing world into mourning. Catch Live Updates of Phil Hughes’ Funeral here Also Read - IND vs AUS, 4th Test: 'Cheteshwar Pujara Put His Body on The Line For Indian Cricket'

In his final journey, everyone wishes to be present and offer their homage to Phillip Hughes. His family expects maximum number of mourners to be present while Cricket Australia is expecting around 400 guests that would include past and present players including Mark Taylor, Sir Richard Hadlee, Brian Lara, Virat Kohli, Ravi Shastri, Shane Warne, Mike Hussey, Ricky Ponting, Brett Lee, Adam Gilchrist and Glenn McGrath for the funeral. The entire New South Wales and Australia Test squad will be present led by Australia skipper Michael Clarke who will be one of the pallbearers and will lead tributes at the funeral of his close friend Phillip Hughes on Wednesday, according to Cricket Australia.

The Sydney Cricket Ground, where this terrible incident took place will be open to the public on Wednesday for a live screening of Australian batsman Philip Hughes’ funeral. The SCG will show the live feed Hughes’ funeral on Channel Nine’s broadcast on their super screens. Apart from Sydney, Gabba and Southbank in Brisbane, WACA in Perth, Adelaide Oval, Blundstone Arena and Federation Square in Melbourne will also show live coverage of the funeral.

Phillip Hughes, a smiling, cheeky fellow as described by his team-mates and friends, Hughes’ premature death has created a void – a space that will take years to fill in. His death has rocked not only cricketing but the entire sporting world. Be it tennis icons or football clubs, one cannot get over the grief caused by this irreplaceable loss.