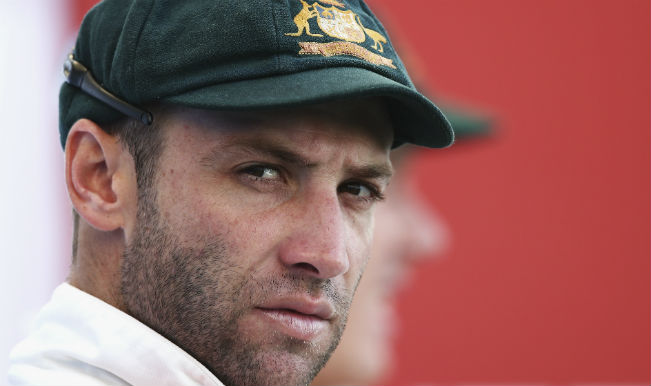 The car passes the street and the bystanders who have gathered give Hughes a loud round of applause. Thank You for the coverage and let’s salute this lovely cricketer and bloke and may his soul rest in peace. Also Read - English Commentator Draws Flack Over His Comments on Sean Abbott, Referencing Phillip Hughes' Death

The car takes out the cricketers and the players, family, friends and the people who had gathered in the Church follow the vehicle.

Phillip is carried out in the coffin by his family and friends, that include Michael Clarke and is taken out to the car, where the body will be sent for cremation. The scene of Hughes’s mother sending out her last goodbye just broke my heart.

Cricket’s heart is bleeding with sorrow and pain and will get up next week. Next week, it will go to Adelaide and beyond but Phillip’s heart will be 63 not out, unconquered forever.

Cricket Australia head James Sutherland, ” I would like to thank Hughes’ family and the world has lost an adored son. The world has been left in disbelief over the last week after Phillip’s passing. The massive outpour of emotion showed the way Phillip is loved around the world. Since Don Bradman, the concept of cricketers from the countryside have lifted the nation. The concept of Australian mateship and it’s bonds are strong and it was shown when Phillip was hit on the head. The back-to-back hundreds against South Africa will epotimise Phil’s talent”

The prayers are on. Presumably, we are at the tail end of the ceremony.

Clarke finishes off by saying, ” Take care little brother. I’ll see you in the middle.”

Michael Clarke,  ” I am so hounoured  by Hughes’s family to speak here to today. I would always wait for face around the corner. If that is what spirit is, he is here with me today. I recall the times at the SCG and and would pick me up when I was down. He would joke about the movie they would watch that night or pass on a useless bit of information about cows. The baggygreen has lifted me up. The spirit of cricket is bound by a girl holding a candle in Karachi or mass heroes like Sachin, Lara and Warne and the entire cricketing ccommunitycame together to support the spirit of cricket.”

“Hughes would call from different parts of the world and asked for photos and information.” Michael ends his speech promising to keep his mate’s dream alive.

Hughesy’s last visit was intriguing and we were having coffee in the kitchen and asked me he wanted to get into the cattle industry. He asked if I could help him”, quips Phillip’s best mate.

Phillip’s friend states that the cricketer knew his cattle well too and and that he had a great acumen for it. Hughesy was a prankster and played with the kids well and took them out of the Sydney fair and came back 26 bags.

Phillip promised to add an extra herd in his cattle everyday and soon, that herd grew quickly.”

Phillip’s sister Meghan, ” He has had an impact on many lives. You have been by brother and hero. Thank you for being my side in every step of the way.” Meghan, understandably is emotional at this point and vows to lead a good life and fulfill all promises. She ends on a positive note saying that goodbyes aren’t forever.

Philip’s younger brother, Jason is on stage. Jason says, ” You always have inspired me in my life and and all the confidence you have instilled in me.” Jason goes on to say how Phil had the perfect smile and that his older brother could never pose bad photo. Jason says he was touched by the partnership of 200 in a local cricket match and promises to take care of Phil’s family.

First up, it’s  Nino Ramunno, Phillip’s cousin with the eulogy. It was a heartfelt one on behalf of their family and it spoke aboutPhillip’s transformation from a a farm-boy to a city boy.

A testimonial about Phillip Hughes is on.

After a rousing, emotional speech that left everyone in tears a couple of days ago, Michael Clarke is still grief stricken; unmoved and and completely desolate. Staring down at the floor, the Australian skipper’s face is the one of the saddest you can ever come across in your life.

The reverends are in attendance and they are performing the last rites. Everybody in attendance are standing as the observe the rituals being performed.

The mood is getting really sombre in here and the happy, cheerful and ever-smiling Phillip needs a fitting farewell. Let’s enjoy some of his best times with the willow now.

As far the Indian contingent goes, we have the likes of Virat Kohli and Rohit Sharma. All the yesteryear stalwarts from Australian cricket are expected to be present at the venue. West Indies will be represented by Brian Lara.

Australian Prime Minister Tony Abbott has declared December 3rd as a national holiday. The man himself, arrived a few minutes ago.

Last Rites are being conducted and thousands have landed landed here to witness the funeral. The entire country looks to have tuned in to give Hughesy a hero’s sending off. On the streets, in the church on TV sets, everywhere, people have tuned in to watch Hughes’s ceremony.

Phillip Hughes, 25, who died on November 27 is being given the final farewell in his hometown of Macksville, New South Wales. With close to 5,000 mourners are expected to attend Hughes’ service at Macksville High School, which will be broadcast live by five television networks.

James Sutherland, Cricket Australia chief executive: “The schedule will inconvenience a lot of people. We understand that. But we very much hope that in light of these extraordinary circumstances, that everyone can see the big picture. Yeah, look, absolutely up to the individual. And any player that is not comfortable or doesn`t feel right, there is medical advice to suggest that they`re is not quite right, then we will obviously understand that, and I am sure the broader public will understand that as well.”

Alastair Nicholson, Australian Cricketers` Association chief: “We`re tremendously grateful for the outpouring of grief globally and in Australia, and their understanding and support though this traumatic time, for them as players and then also as individuals.”