The manufacturer of the helmet worn by Phillip Hughes said on Tuesday, he was not wearing their most up-to-date model after the Australian batsman was left fighting for his life having been knocked out by a bouncer. 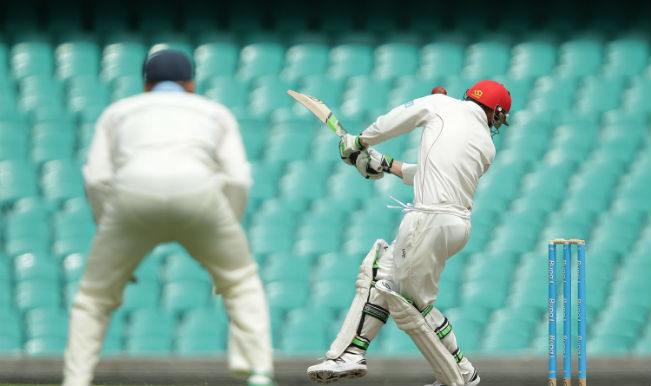 Sydney: The manufacturer of the helmet worn by Phillip Hughes said on Tuesday, he was not wearing their most up-to-date model after the Australian batsman was left fighting for his life having been knocked out by a bouncer. Hughes, 25, who was pressing for a Test recall, crashed to the ground unconscious after the heavy blow to the lower head and was rushed to hospital from the Sydney Cricket Ground on Tuesday. Also Read - Cricketers wear black armbands on Phillip Hughes first death anniversary

Television images showed the helmeted Hughes, who had scored a composed 63 for South Australia in the Sheffield Shield game, standing dazed before going down face-first following the rising delivery from New South Wales bowler Sean Abbott. Masuri, the UK-based manufacturer of the helmet worn by Hughes and one of the leading suppliers of protective headgear to the world’s top batsmen, said in a statement they wished him a “full and speedy recovery”. Also Read - Australia remembers Phillip Hughes on anniversary of death

Their statement said they were seeking as much footage of the incident as possible to be able to see more conclusively exactly where Hughes had been hit. “From the footage and pictures currently available to Masuri, it appears that Phil Hughes was struck by the ball to the rear of the grille and below the back of the shell, missing his Masuri Original Test model helmet,” the company’s statement said.

“This is a vulnerable area of the head and neck that helmets cannot fully protect, while enabling batsmen to have full and proper movement.” However, Masuri’s statement added: “The newly-developed Masuri Vision Series helmet, which supersedes the 2013 helmet worn by Phil Hughes, does afford batsmen extra protection in this region — and still allows comfortable movement.”

Nevertheless, it was yet to be determined whether a change of helmet could have prevented Hughes’s accident or indeed if the design of the one he was wearing had played any part at all in his injury. Masuri managing director Sam Miller said: “The thoughts of everyone at Masuri are with Phil Hughes and his family.

“Helmet manufacturers are constantly developing their products to make them safer. “We work continuously with the governing authorities worldwide to reduce the risk of injury to players.” A spokesman for Masuri told AFP the new Vision Series helmet had gone on sale in the UK in August 2014.

Former England fast bowler Stephen Harmison said he had been “horrified” by Hughes’s injury, particularly as he was a top-order batsman. Harmison, who in the first Test of the 2005 Ashes at Lord’s struck Ricky Ponting, one of cricket’s greatest batsmen, with a delivery that hit the then Australia captain between the helmet and the grille, drawing blood from the Tasmanian’s cheek, told BBC Radio Five: “It’s horrifying seeing something like that happen to a top-order batsman.

“You sometimes fear for lower-order players, bowlers especially when they’re batting and facing the quick bowlers. You don’t fear too much for the top-order batsmen because they’re good players and they’re used to fending off short balls. “It just looked like a freak accident,” added Harmison, echoing comments made by other leading cricketers and experienced observers.

“It’s saddening and sickening to see such a fantastic player in the position he’s in. We all hope he pulls through.” Safety standards for helmets in English county cricket, where Hughes has had spells with Middlesex, Hampshire and most recently Worcestershire, were already in the process of being improved prior to his accident.

Angus Porter, chief executive of England’s Professional Cricketers’ Association, said: “There is a new British safety standard which is in the process of being implemented that will hopefully offer a greater measure of protection. The standard is now live and the manufacturers are working with testing houses on designs that will pass.

“The first batch of helmets are coming through now which would pass the test and we’re hopeful we will see them used in professional cricket next season.” However, Porter said complete protection was impossible. “It’s difficult to know exactly what difference the standard might have made in this precise circumstance because there will always be an element of risk in cricket,” he said. “The balls are hard and they travel fast. No design will eliminate risk completely.”