Scattered thunderstorms are on the cards and it is expected to be overcast throughout the day.

Potchefstroom Weather Forecast Ind U19 vs Ban U19

Defending champions India Under 19 lock horns with their Bangladesh counterparts in the finals on Sunday at Potchefstroom and eyes would be on the weather. Fans from both sides would want a 100-overs game, but that will be possible or not remains a question as there are realistic chances of rain and thundershowers. Also Read - Shoaib Akhtar Lauds Centurion Yashasvi Jaiswal, Says Pakistan Youngsters Can Learn From Him

Scattered thunderstorms are on the cards and it is expected to be overcast throughout the day. Also Read - It’s A Dream Come True For Me To Score A Century in the World Cup: Yashasvi Jaiswal

The humidity is expected to be around 65 per cent and the chances of precipitation are 50 per cent. Also Read - Under 19 World Cup: Pakistan to Treat Semi-final Against India as 'Normal Game'

In case the match does not take place due to rain, the trophy would be shared as there is no Reserve Day. 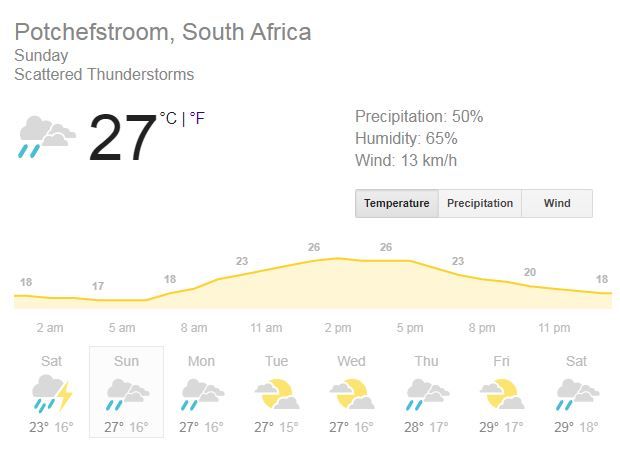 Meanwhile, the Priyam Garg-led India will go for a win and would settle for nothing short of that. Bangladesh, on the other hand, has been impressive throughout the campaign and would hope to stage an upset.

For Bangladesh, Mahmudul Hasan Joy and Tanzid Hasan are players to watch out for with the bat, while left-arm spinner Rakibul Hasan will pose a threat with the ball.