Pushkar Sharma slams a 144 runs hefty innings against SCLPS A in the NPCA Super50.

Kenya’s swashbuckling southpaw, Pushkar Sharma slams a 144 runs hefty innings against SCLPS A in the NPCA Super50. Pushkar Sharma is known for his stroke making and as known to many, he is the former U-16 captain of Mumbai.Also Read - Aim is to Play For Kenya, Says Indian-Born Kenyan Cricketer Pushkar Sharma

He has had his struggle as he lost his father at the peak of his career and now it’s his showers that is seeing the progress in Pushkar Sharma as a cricketer. After losing the toss, Ruaraka A was put to bat first by SCLPS A. Also Read - Pushkar Sharma Shines With New Endorsement Deal With 'Fast&Up'

They lost two early wickets and then came in Pushkar who glued a vital partnership with Kenneth Wiaswa.
Pushkar batted at one down and amassed 144 runs from 139 deliveries. His innings saw 20 boundaries scattered in different directions of the circle. Pushkar And Kenneth jolted a 195 runs stand which helped Ruaraka A to get into a commendable position. Also Read - Leading Foodtech Company, Pintola Peanut Features Ex Mumbai Captain, Pushkar Sharma With His First Promotion Deal

While chasing a total of 341 in 50 overs, SCLPS A fell short to just 212. Purshotam Vekariya was the star with the ball as he bagged four wickets to his name. He conceded 66 runs in his full quota. This magnificent knock of 144 of 139 balls from Pushkar Sharma saw him achieve the man of the match award in this encounter.

After the innings, Pushkar thanked his family and said, ” When I went out to bat, our team was already in pressure because we lost 1 wicket in the very first ball of the match.

“It was a challenge to face that pressure and slowly and steadily I tried to smoothen things up and keep the scoreboard ticking. I tried my best and It’s my highest runs in ODI till now. In the end, I am thankful to my family for supporting me.”

Let’s hope to witness more of such mesmerizing knocks of the willow of Pushkar Sharma. 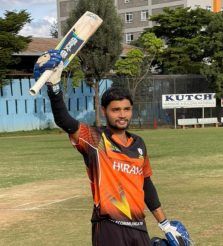 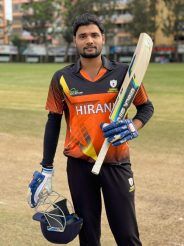