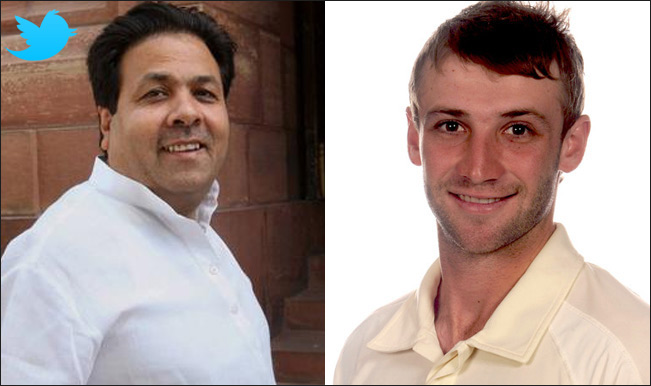 Social Media is a place where every single word can come under scrutiny and if you’re stated something wrong or misspelled a name or a word; people literally pounce on the opportunity to take a jibe. If you’re a VIP/VVIP or a celebrity, then hell is bound to land on your head. Entire Australia and the Cricketing fraternity were busy mourning the demise of Phillip Hughes. Millions took to social media to offer their condolences including Indian Cricketers and Prime Minister Narendra Modi. Former Indian Premier League (IPL) chairman Rajeev Shukla too joined the bandwagon but made a massive blunder. Also Read - IND vs AUS: Cricket Australia Writes Open Letter to BCCI, Says 'Will Never Forget The Sacrifices' | Read Full Letter

As Australia were witnessing Hughes’ funeral at his hometown of Macksville in New South Wales, legends like Brian Lara, Adam Gilchrist, Shane Warne to name a few, were in attendance to pay their final respects. India were represented by Ravi Shastri and Virat Kohli. Shukla wanted to convey the same via Twitter. However, the 55-year-old made a massive blunder by spelling Hughes as ‘HUGE’. Being a journalist he have been careful about at least getting the name right. Also Read - IND vs ENG: Kevin Pietersen Warns India in Hindi Ahead of England Series, Cheeky Tweet Goes Viral

Rajeev Shukla hasn’t corrected his Tweet and has neither acknowledged the error nor has he deleted the same at the time of writing. Mistakes are bound to happen but it would be great if he makes amends at the earliest before a number of politicians cross the line and find another reason to criticise the Rajya Sabha MP’s actions. Here are some of the reactions of the Twitterati’s.

@ShuklaRajiv Wow a brilliant journo who joined Cong. From one brain dead situation to another. A very smooth logical transition.