FIFA president Sepp Blatter said Saturday he was "shocked" at the way the US judiciary has targeted football's world body and slammed what he called a "hate" campaign by Europe's football leaders. 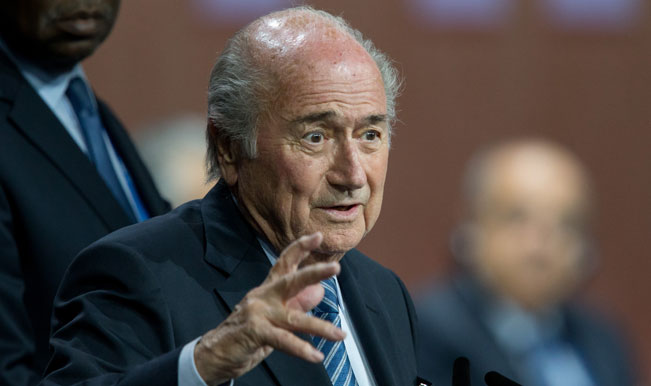 Zurich, May 30: FIFA president Sepp Blatter said Saturday he was “shocked” at the way the US judiciary has targeted football’s world body and slammed what he called a “hate” campaign by Europe’s football leaders. Blatter said he suspected the arrest of seven FIFA officials this week under a US anti-corruption warrant was an attempt to “interfere with the congress” at which he was elected to a fifth term as FIFA president Friday. Also Read - Hansi Flick Should Have Won The Best FIFA Coach Award, Says Jose Mourinho

The battle with his opponents went into a new round on Saturday as the FIFA executive committee met to discuss how many places each continent gets at the 2022 World Cup in Qatar. While US officials have said more indictments in their investigation are likely, Blatter said he believes there is a deliberate campaign against FIFA including the arrests just two days before the vote. Also Read - FIFA Cancels Next Year's U-17 Women's World Cup in India, Allots it 2022 Edition

“There are signs which cannot be mistaken: the Americans were candidates for the 2022 World Cup and they lost. I am not certain, but it doesn’t smell good,” he told Swiss television channel RTS.

He also said the United States was the “number one sponsor” of Jordan, home country of his challenger for the FIFA presidency, Prince Ali bin al Hussein. The Jordanian, who had the backing of European football body UEFA, withdrew from Friday’s race after the first round of voting. The arrested officials were all detained for corruption cases in North and South America and Blatter said they could have been arrested on their home territory.

He also condemned comments about FIFA made by senior members of the US judiciary, including Attorney General Loretta Lynch, who lamented the “rampant, systemic and deep-rooted” corruption in football. Another official spoke of a “World Cup of fraud.”

“Of course I am shocked,” Blatter responded. “I would never as FIFA president make comments about another organisation without being certain of what has happened.”

US authorities have so far indicted 14 people, including the seven held in Zurich, on charges of involvement in $150 million of bribes for sports media contracts. They include two FIFA vice presidents. Richard Weber, head of the Internal Revenue Service criminal investigations unit, said he was “fairly confident” more indictments would follow.

“We strongly believe there are other people and entities involved in criminal acts,” Weber told The New York Times.  Blatter also hit out at UEFA and its president, Michel Platini, who had called for his resignation over the corruption scandals.

“It is a hate that comes not just from one person at UEFA, it comes from the UEFA organisation that cannot understand that in 1998 I became president,” he added in the interview. Asked whether he would forgive Platini, Blatter said “I forgive everyone but I do not forget.”

His re-election Friday marked a dramatic end to a bitter campaign dominated by corruption allegations. Blatter vowed to leave a “strong” FIFA when he leaves in four years.

“I’m not perfect. Nobody is perfect. But we will do a good job together,” he said.

The prince thanked those “brave enough” to vote for him before withdrawing. Most of Europe’s 53 votes went to the prince, along with the US and Australia. But Blatter’s rock-bed support in Africa and Asia saw him through. European football leaders expressed concern at Blatter’s win and have hinted they could take new action against FIFA.

English Football Association Greg Dyke indicated England could be ready to back a European boycott of the World Cup. English representative on the FIFA executive, David Gill, has said he will not take up the place because of Blatter’s victory.

“I am proud that UEFA has defended and supported a movement for change at FIFA. Change which in my opinion is crucial if this organisation is to regain its credibility,” Platini said.

He also said UEFA could discuss measures against FIFA on June 6. US Soccer president Sunil Gulati said he would continue to push for “meaningful change” within FIFA. Sponsors and government leaders have hammered FIFA over the corruption scandal. British Prime Minister David Cameron has backed calls for Blatter to resign while French President Francois Hollande said sports groups running major events must be “irreproachable”.

FIFA sponsors Coca-Cola, Budweiser and McDonald’s called after the election result for quick moves to transparency. Credit card giant Visa has threatened to “reassess” its sponsorship if FIFA does not clean up its act. The FIFA executive meets Saturday to discuss regional places for the 2022 World Cup with each confederation battling for extra places. Europe and South America fear they could be targets to lose places.