Ritika labels Rohit as "her girl" in her latest Instagram picture on Tuesday.

Time and again, India opener Rohit Sharma‘s wife – Ritika Sajdeh has proved herself to be the boss of social media with her witty replies and a great sense of humour. Ritika has never shied away from a playful tussle when it comes to indulging in fun banter with Rohit’s teammates, particularly Yuzvendra Chahal. Also Read - Five Records Rohit Sharma Broke During Twin Hundreds Against South Africa

Recently, Ritika took to Instagram and shared a new post where she can be seen holding her little daughter – Samaira. She captioned the post, “My Girl”. Also Read - Ritika Sajdeh Roasts Yuzvendra Chahal, Who Objects to Being Removed From Family Photo Featuring Rohit Sharma | SEE POST

Commenting on the latest picture, India’s newest Test opener Rohit came up with an instant reply on his wife’s post. He questioned Ritika about his absence from the picture. He wrote, “Why am I missing!”

Responding to her husband’s question, a cheeky Ritika responded in a playful manner where she referred Rohit as “You’re my girl too”. Ritika also added a heart emoji along with the comment. 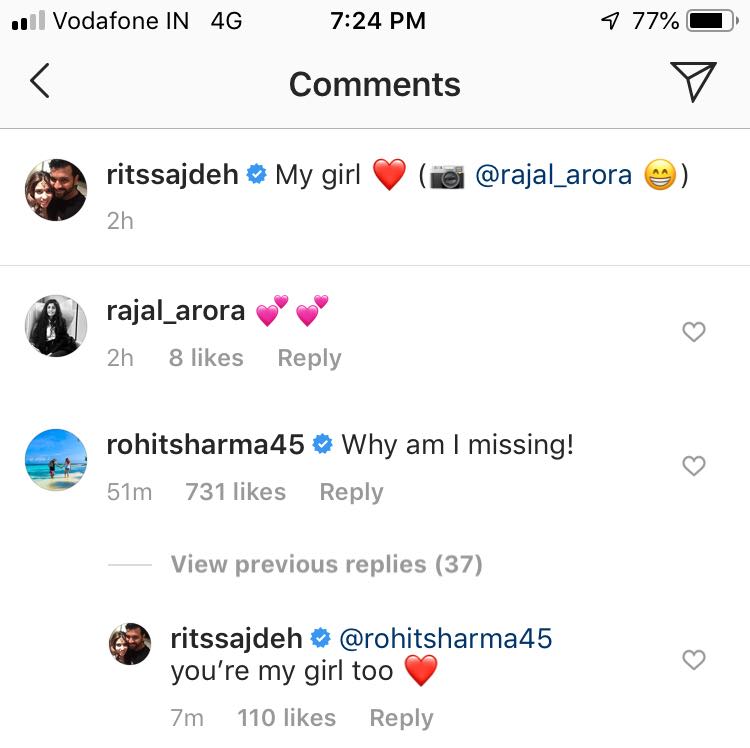 On Monday, Rohit became the first player to score a century in each innings of his maiden Test as an opener, jumped to a career-best 17th position in the ICC Test Player Rankings.

Rohit, who now has five centuries from 28 Tests, gained a whopping 36 slots after his knocks of 176 and 127 in the first Test against South Africa in Visakhapatnam helped India win by 203 runs and take a 1-0 lead in the three-match series.