John McEnroe and Roger Federer - both legends of the game; one a successful Davis Cup player and the other is looking for his maiden glory with Switzerland. 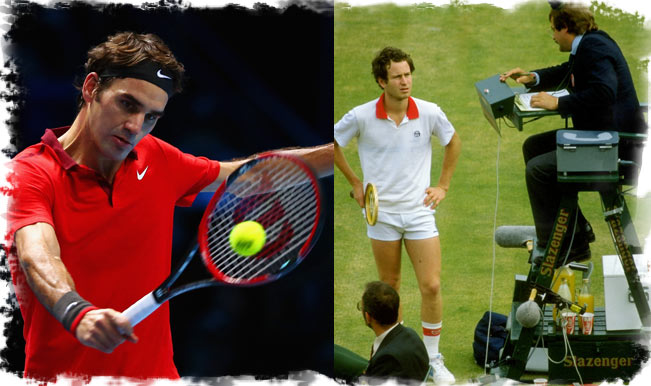 Sports brutally sculpts expressions; the game often leaves a mark of one’s personality and fame restrains you to that design. Tennis like any other sport, has found players having their own versions of expressing themselves through the game. At the top of the ladder of greats stand two contrasting personalities – John McEnroe and Roger Federer. Also Read - French Open 2020 Final: Chris Evert Calls Out Novak Djokovic For 'Rivalry With Rafael Nadal Biggest in Sport' Comment

McEnroe is the quintessential icon of a United States that was well on the verge of toppling the USSR and assuming power in a unipolar world. He wouldn’t stoop down to anyone; neither the rules, nor the men with power to dispense them. Be it his game or a tangled mess of hair, he displayed arrogance. Winning seemed like the only desire in his life, defeat and unfair decisions would attract bad tempers and not-so-pretty one-liners flowered with expletives. His aggressive game was only an outstretch of his persona. Also Read - French Open 2020: Novak Djokovic Showers Big Praise on Rafael Nadal After Historic Roland Garros Triumph, Says Today You Showed Why You Are King of Clay

Roger Federer offers a stark contrast. His game oozes of sublime shots, almost turning a bull-fight of rallies into a connoisseurs’ art. There is tidiness about his game. A bunch of hair strands are put back every now and then as he resumes his game. He won’t yell, won’t swear, rarely give exaggerated reactions – in victories or at times when he disagrees with the umpire’s call. But, there are emotional outbursts of tears every now and then. His personality is as neat as his game.

Disclosing a heated up moment in the locker room between Stanislas Wawrinka and Federer following the semi-final clash of Barclays ATP World Tour Finals, McEnroe told Daily Mail, “something went on in the locker room, there was a long talk between the players that went on well into the night and the stress of that… I don’t think that helped the situation.”

However, the world number two shot down the flared up media reports saying that it was a momentary exchange of heated arguments which has been sorted out. Like everything Federer, he has in conventional and elegant style responded to the questions. He didn’t name pick, he didn’t accuse, he didn’t deny. He accepted and moved forward like he always has.

Even as the two men have found a common ground ahead of the Davis Cup Finals 2014, they are highly contrasting individuals, with different ego levels to deal with. One will catch the eyeballs with his drama, the other will coolly put off the fire.

Both will assume legendary status in the game even as years pass by. The year 1984 and 2004 will be considered to be the most dominant of those. But Roger Federer is no John McEnroe; nor is Stanislas Wawrinka a Jimmy Connors, unlike what Mats Wilander would suggest.

John McEnroe and Roger Federer – both legends of the game; one a successful Davis Cup player and the other is looking for his maiden glory with Switzerland. However, unlike McEnroe, Federer hasn’t had nemesis from Switzerland criticising him publicly. The show of unity by Federer and Wawrinka serves as good news for Switzerland and tennis fans across the world. France, not really sure!