Federer and Wawrinka have long put behind their row after a semi-final meeting at the ATP World Tour Finals in London last month. 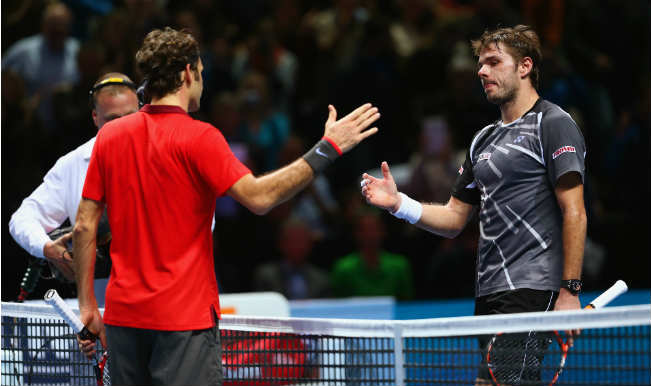 Federer said: ‘The evening was a great experience for me. Stan and I were given a wonderful reception in the stadium. ‘The fact that we were able to raise such a large amount for the foundation makes the evening even more special. A hearty thank you to Stan that he made this possible.’ Also Read - Novak Djokovic Pays 'Heartfelt' Tribute to Kobe Bryant, Bushfire Victims After Australian Open 2020 Win | WATCH VIDEO

Federer and Wawrinka have long put behind their row after a semi-final meeting at the ATP World Tour Finals in London last month. It was understood one of the reasons they fell out was because Federer’s wife Mirka heckled Wawrinka from the sidelines during the match.

But days later the Swiss duo teamed up to help Switzerland claim their first ever Davis Cup title with a 3-1 victory against France in Lille.
Federer begins the 2015 season Down Under at the Brisbane International starting Jan 4. Wawrinka, meanwhile, has opted to play in Abu Dhabi and Chennai before heading to Melbourne for the defence of his Australian Open crown.