Ireland will still have a chance to level the series when the two sides meet in the second and final T20 to be played on Friday.

Just what the doctor ordered. India began their English summer in an emphatic manner as they registered an outstanding 76-run win over Ireland in the first T20 of the two-match series played at the Malahide Cricket Club in Dublin on Wednesday. Also Read - Virat Kohli Most Searched Cricketer From January to June 2020; Rohit Sharma, MS Dhoni Behind India Skipper

Chasing a daunting total of 209, the hosts could only manage 132 runs for the loss of nine wickets in their stipulated quota of 20 overs. The Irish got off to a decent start but Kuldeep Yadav (4/21) and Yuzvendra Chahal (3/38) ran riot as Ireland could only muster 132 on the board, thus emphasizing the gap between the two sides. Kuldeep was adjudged the man of the match was his brilliant spell of leg-spin chinaman. Also Read - Indian Cricket Team Kit Sponsorship: Puma Buys Bid Document, Adidas Too Could Enter fray

Paceman Jasprit Bumrah (2/19), who drew first blood with the wicket of Sterling, came back to complete the proceedings with the wicket of George Dockrell (9) as the hosts expectedly ended on the losing side. Also Read - Kozhikode Plane Crash: Virat Kohli to Rohit Sharma, How Cricket Fraternity Reacted After Air India Flight Mishap in Calicut | POSTS 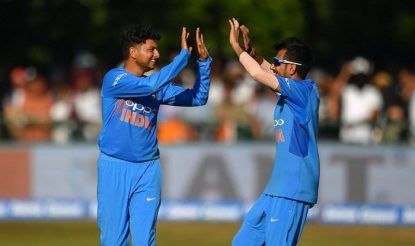 James Shannon was the star Irish batsman as he scored 60 runs off 35 balls. Apart from him, none of the Ireland batsmen could stay long at the crease.

Earlier, the Men in Blue rode on brilliant half centuries from seasoned openers Rohit Sharma and Shikhar Dhawan to post a commanding 208/5 in their innings. Put in to bat, India were off to a blast with Rohit (97 off 61 balls; 4×8, 6×5) and Shikhar (74 off 45 balls; 4×5, 6×5) forging the second highest opening stand of 160 runs before paceman Peter Chase applied the brakes with three wickets in the final over. Chase scalped four wickets and was the lone Irish bowler to somewhat contain the Indian batsmen. 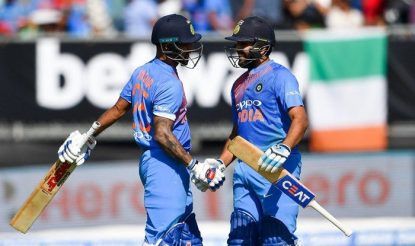 The hapless Irish attack drastically failed to control the onslaught from the ruthless Indian openers as the score swelled to 150 runs by the 16th over with Dhawan bringing up his fifty off mere 27 balls and the right-hander racing to his half ton in 39 deliveries.

Ireland will still have a chance to level the series when the two sides meet in the second and final T20 to be played on Friday.