On Thursday, former India cricketer and legend Sachin Tendulkar took a chance to subtly roast Board of Control of Cricket in India (BCCI) President Sourav Ganguly over ‘skipping’ training sessions during their playing days. Initially, Tendulkar started by lauding Ganguly as he referred to him as ‘Dadi’. Also Read - IPL 2021 Opening Ceremony Ahead of MI vs RCB: No Fireworks Amid COVID-19 Pandemic, BCCI Invites Differently-Abled Council to Launch T20 Tournament

To keep himself active, Ganguly shared a picture of him doing yoga on cold winter mornings. Dada, as he is popularly known, shared a picture where he can be seen, sitting on a field. The veteran captioned the picture and wrote, “A good fitness session in a cold morning is very freshning ….” Also Read - India Will Host The Best Ever ICC T20 World Cup: Sourav Ganguly

“Well done Dadi! Kya baat hai…” he wrote. Ganguly was quick to respond, referring to him as a ‘fitness freak. He wrote, “…thank u champion …. always was a fitness freak .. u remember the great training days ?” Also Read - Sachin Tendulkar Discharged From Hospital; To Continue COVID-19 Recovery in Home Isolation

But then Sachin reminded him of how the southpaw used to skip training sessions during their playing days. The Master Blaster wrote, “Yes Dadi..We all know how much you enjoyed training! Especially ‘Skipping’”.

A good fitness session in a cold morning is very freshning …. 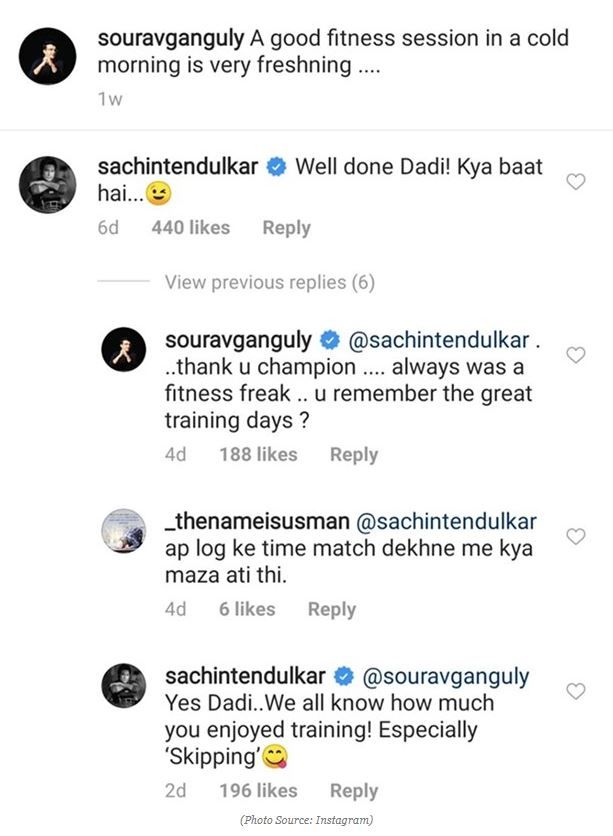 Tendulkar and Ganguly still remain one of India’s best opening pairs in limited-overs cricket. The two started opening the batting from 1996 and their partnership carried on until 2007. During this while, they amassed a staggering 6609 runs in merely 136 innings at an astounding average of 49.32.

The two have stitched 21 hundred stands and 23 fifty partnerships in their illustrious career spanning for more than a decade at the top. Even after years following their retirement, their tally remains to be the highest. Shikhar Dhawan and Rohit Sharma are inching closer to them, scoring 4708 runs in 105 innings, averaging 45.26.