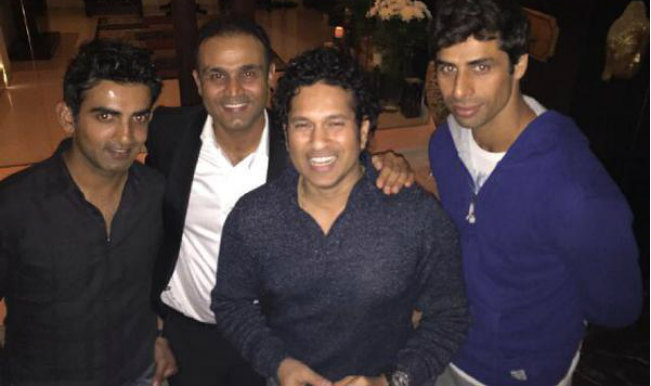 Indian batting legend Sachin Tendulkar on Thursday posted a picture with his 2011 World Cup winning Delhi teammates Virender Sehwag, Gautam Gambhir and Ashish Nehra on Twitter. The four players who played a major role in India’s World Cup winning campaign are unlikely to take part in the defence of the cup when the team goes to Australia and New Zealand for the 2015 ICC Cricket World Cup. Also Read - IPL 2020: KKR Should Demote Shubman Gill in The Batting Order if he Cannot be More Aggressive, Says Virender Sehwag

The 41-year old Tendulkar has been a part of six World campaigns, scoring most number of runs and centuries in cricket’s greatest extravaganza. However, he achieved the prized dream only in his endeavour as he top-scored for India in the competition in its quest to lift the cup. Also Read - 'Why All Feminists Show Cleavage' - Sona Mohapatra Was Asked This on Twitter And Here's What She Said

However, the paths ran the other side for Gautam Gambhir and Virender Sehwag, who lost form and were dropped from the national side. Younger players like Shikhar Dhawan, Rohit Sharma and Ajinkya Rahane did well in the opportunities provided to stake claim for the top three berths in the side. Meanwhile, Ashish Nehra continued to suffer from a string of injuries and poor form leading to his ouster from the side.