Sachin Tendulkar has requested the Sports Ministry to pursue and get Sarita Devi's ban revoked by the AIBA. 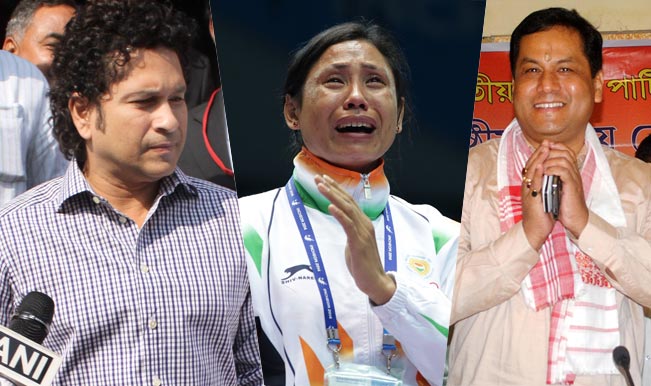 New Delhi: Batting legend Sachin Tendulkar will be meeting Sports Minister Sarbananda Sonowal on Wednesday to discuss Sarita Devi‘s possible ban, which could be imposed on the boxer by AIBA for refusing to accept the bronze medal during the Incheon Asian Games medal ceremony. Tendulkar, who is also a Rajya Sabha MP, will be meeting the Sports Minister at 2:30 pm in the afternoon. Also Read - Assam CM Speaks to Mizoram Counterpart After Several Injured in Border Clash, Centre Calls Meet

Tendulkar had earlier appealed against the life ban on her by the International Boxing Association. In a letter addressed to Sonowal, Tendulkar had urged him him to support the boxer. Also Read - IPL 2020: Here's Why Google Search Result For Shubman Gill's Wife Shows Sara Tendulkar

“I would urge you to kindly look into this issue urgently and ensure that she is given competent support so that her career is not threatened and ends in a premature manner,” Tendulkar had written. Sarita Devi lost in the semifinals of the women’s lightweight (60kg) competition at Incheon in September and in protest tried to give her bronze medal to her opponent from South Korea.

Sonowal had, earlier in the day, said that the government is more than keen to pursue Sarita Devi’s matter with AIBA and get the ban overturned. Tomorrow’s meeting will be chaired by Sonowal himself, and besides Tendulkar, members of Boxing India, Indian Olympic Association and some other prominent sportspersons will pursue Sarita’s case.

“We will be strongly pursuing Sarita Devi’s matter internationally. I will be attending the meeting tomorrow, which will see the members of Boxing India, IOA and prominent sportspersons present there. We will try to get her ban lifted. Sarita Devi should be allowed to play for the country,” said the minister on the sidelines of a function organised by United Nations Women, which aimed at raising awareness and gender equality.