Arguably the greatest batsman in contemporary cricket, Tendulkar had walked into international sunset after a glorious career spanning 24 years. 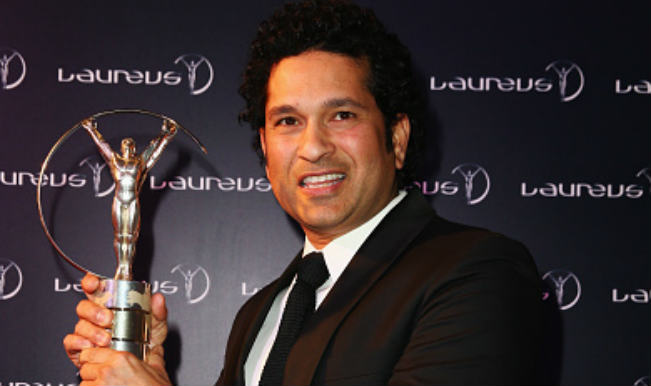 Indian cricket icon Sachin Tendulkar was inducted as one of the five new members into the prestigious Laureus Sports Academy in a glittering annual award ceremony at the Shanghai Grand theatre. Tendulkar who was in Shanghai for the biggest awards night in the sports world kept his followers glued with the timely updates on social media. “It is a huge honour standing here, being a new member of the Laureus Academy. I never thought that guys whom I watched growing up, I will be sharing the stage with them,” Tendulkar told a packed audience that included the who’s who of the global sporting fraternity. Also Read - Sachin Tendulkar Shares Inspiring Video of Differently-Abled Man Playing Carrom With His Feet | Watch

“Majority of India’s population is below 25 years old and they exercise their thumbs these days. So I would like to encourage the youngsters back home to engage themselves in sports, get out and play sport and get healthy and fitter,” added Tendulkar, who turns 42 in a little over a week’s time. Sachin Tendulkar shared a photograph along with former Australian captain Steve Waugh and Olympic athlete Daley Thompson. Also Read - ENG vs IND 2021: 4 Milestones Which Virat Kohli Can Achieve in Upcoming Five-Match Test Series

Attended the #LauerusSportsAwards and met some great champs! With Steve Waugh and Daley Thompson

Arguably the greatest batsman in contemporary cricket, Tendulkar had walked into international sunset after a glorious career spanning 24 years, in front of his home crowd at the Wankhede Stadium following a Test series against the West Indies in November 2013. In his over two-decade international career, Tendulkar amassed 18,426 runs in 463 one-dayers at an average of 44.83, while in Tests, he has 15,645 runs at an average of 54.32 in 194 matches. The tally includes 51 hundreds and 66 half-centuries.

The diminutive right-hander has an astonishing 49 ODI hundreds, including a double ton, the first in the shorter form. Tendulkar also has a mammoth tally of 96 ODI 50s to his credit. Tendulkar, who made his ODI debut against Pakistan way back in 1989, retired from the format after the Asia Cup in 2013 after completing a century of international hundreds.