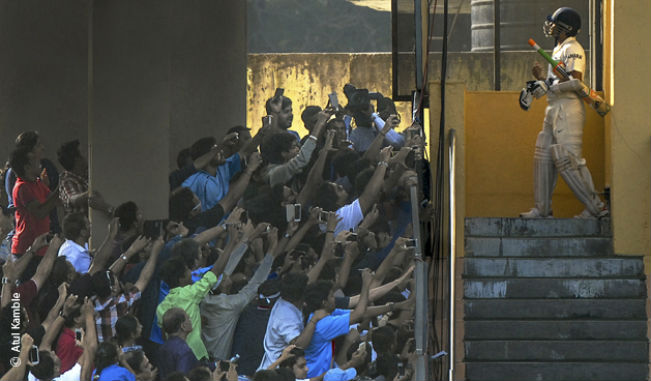 Sachin Tendulkar’s last walk to the crease, which featured on the cover of Wisden and was a photo taken by photographer Atul Kamble has been ajudicated as the best  photo at the fourth MFI-Yes Bank National Press Photo Contest 2014. The image of the Indian batting legend looking at the sun, a trademark ritutal of Tendulkar throughout  his career with delirious fans whipping out their cameras and phones to capture the moment was a big hit amongst the masses and recieved widespread praise for the 41-year old, Mumbai based photojournalist, Kamble. Also Read - IPL 2020, KXIP vs RR: Nicholas Pooran Leaves Cricket World Stunned With His Unreal Fielding Effort | WATCH VIDEO

Tendulkar bowed out of cricket in his home ground, Wankhede Stadium in an emotionally drenched farewell against West Indies on 16th November 2014 and plugged the hear strings of millions in the country, most of them his ardent fans with a beautiful speech, straight from his heart. The photo, though is going to go down in history and will be used for decades as a refrence note, which captures the essence of Sachin’s mass hysteria, whenever he walked to the wicket. Also Read - Dream11 IPL: MS Dhoni Has Left Behind Virat Kohli, Sachin Tendulkar in Terms of Popularity: Sunil Gavaskar