Olympic medalist Sushil Kumar and his friends are seen with sticks hitting another wrestler in the images that have surfaced on Thursday.

New Delhi: Olympic medalist Sushil Kumar and his friends are seen with sticks hitting another wrestler in the images that have surfaced on Thursday. The images are learnt to be screengrabs of a video which many believe to be the one that the Olympic medalist had asked one of his associates to make on May 4.Also Read - Sagar Rana Murder Case - Sushil Kumar Used Telegram App, Internet Dongle While Escaping - Crime Branch 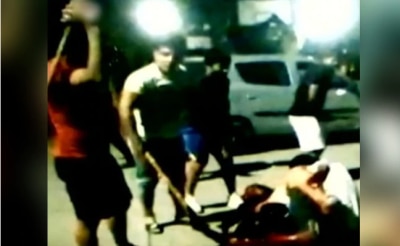 A screengrab of a video that shows Olympic medalist Sushil Kumar and his friends hitting another wrestler with sticks. (Twitter)

According to the ANI report, Sushil asked Prince (his friend or associate) to make the video in which Kumar and his associates were seen thrashing Sagar Rana, a former junior national champion, and his two friends – Sonu and Amit Kumar. However, Rana died, following which he fled, according to the police. Also Read - Sagar Rana Murder Case: Delhi Police Suspends Arms License of Sushil Kumar

Interestingly, Sushil Kumar has defended himself as he has stated that he went to the Chhatrasal Stadium to stop the brawl. It is reported that the wrestler was investigated for close to four hours by the Delhi Police’s Crime Branch.

ANI wrote in its post, “Death is due to cerebral damage as a result of blunt force/object impact. All injuries are antemortem in nature”, states the postmortem report of Sagar Rana killed in a brawl at Chhatrasal Stadium in Delhi.