Several fans including tennis star Sania Mirza advised the former cricketer that he should bring back his beard.

Since Ravindra Jadeja started the trend in this year’s IPL, ‘Break the Beard’ challenge has become one of the most favourite pastime of cricketers around the world. Former India cricketer Yuvraj Singh is the latest entrant in the league as he gave his fans a glimpse of his ‘clean-shaven’ look in his new Instagram post. Yuvraj took a selfie of himself in which he can be seen making a pout. The picture not only went viral after getting shared but also created quite a stir among his fans and friends. Indian tennis star and Yuvraj’s good friend Sania Mirza also responded to the click with a witty comment. Also Read - IPL 2021: Jos Buttler Hails Rajasthan Royals 'Captain' Sanju Samson, Calls Him Free Spirited And Relaxed

The former allrounder captioned the pic: “New look chikna chamela !! or should I bring back the beard?” Many of Yuvi fans expressed their opinion and told Yuvraj to grow his beard back. Sania also joined the chorus and came up with a hilarious response. She wrote in the comments section: “Are you pouting to hide the chin under the chin we spoke bout ???? Bring the beard back”. Also Read - Cricket: Ramesh Powar Returns as Head Coach of Indian Women's Cricket Team, Replaces WV Raman

New look 👀 chikna chamela !!😄🤪or should I bring back the beard 🧔?

Known for his humour, the 37-year-old wasted no time in coming up with an even wittier reply for Sania. He wrote, “I’m not pouting. It’s my natural look.”

Talking about the ‘Break the Beard’ challenge, it’s a trend which sportspersons around the world followed where they shaved off their beards just to break the monotony and gave themselves a fresh look. The challenge is to shave your beard and upload short videos on social media, using the hashtag

The image has gathered more than 3 lakh likes in just a few hours – and still counting. 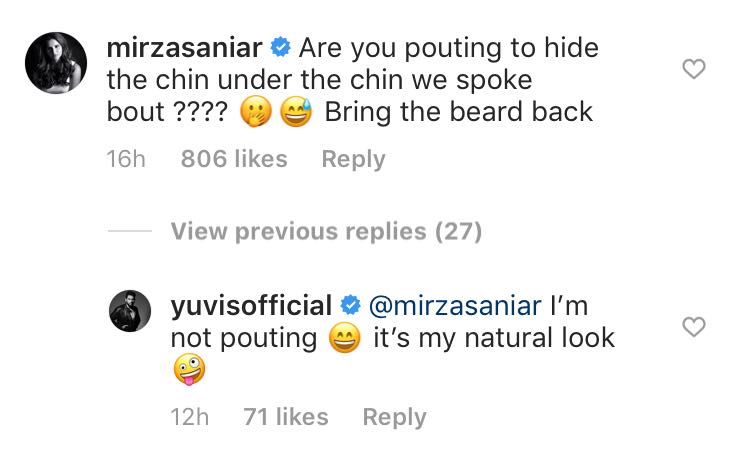 “If you want to get the best out of somebody, you have to make them feel secure. A player can never perform when he’s insecure. That was the big reason India didn’t win the World Cup,” Yuvraj told a news channel.