Sepp Blatter: 2026 World Cup to be held outside Asia

"(Platini) was in the meeting this morning, and two speakers, one of those European, said that we have to get together, because UEFA is part of FIFA. They need FIFA and FIFA needs UEFA." 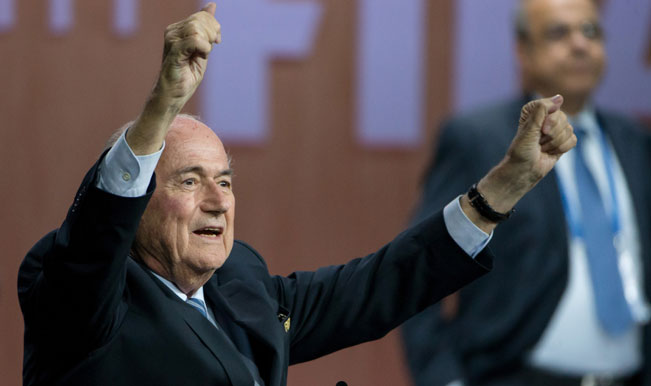 Zurich, May 30: Newly re-elected FIFA President Sepp Blatter said here on Saturday that the 2026 World Cup will not be held in Asia. “The executive committee decided at the meeting that any association from around the world can bid for the 2026 World Cup, apart from countries (and regions) in Asia,” said Blatter at his first press conference after his re-election, held at the FIFA headquarters. (Read: Pleased with Sepp Blatter’s re-election as FIFA president: Russian Sports Minister) Also Read - FIFA Cancels Next Year's U-17 Women's World Cup in India, Allots it 2022 Edition

Qatar will host the 2022 edition and traditionally the next World Cup is not held in the same continent. Blatter also revealed that the 2018 World Cup in Russia will still have 32 teams, with slots for each continent unchanged. The 79-year-old felt relieved after being re-elected as FIFA president two days after 14 people were indicted with seven senior football officials arrested in dawn raids at a hotel here. Also Read - Lionel Messi's Goal Disallowed by VAR During Argentina-Paraguay World Cup 2022 Qualifier Creates Controversy

“A couple of words on the storm now. This storm has not passed but it has not become a hurricane at this time. We will work with our institutions and our bodies and that way we will avoid future situations where there are surprises that catch us on the back foot,” said the Swiss.

“Furthermore, these crimes that have been committed, we need to establish whether they are administrative or criminal in nature. I do not see how FIFA are directly affected by the situations in the Americas and the people involved could have been indicted at any time other than two days before the FIFA Congress.”

He said FIFA has shown unity and he is happy that he is not alone to fight. “I am here as president of FIFA and I will continue my work. We will continue to fight for good things. It is my duty to live up to my responsibility and help recover our reputation, but I am not alone. The executive committee is with me,” he added.

He said FIFA and the Michel Platini-led Union of European Football Associations (UEFA), which urged him to resign before the election, need each other and will have to work closer together in the future. “(Platini) was in the meeting this morning, and two speakers, one of those European, said that we have to get together, because UEFA is part of FIFA. They need FIFA and FIFA needs UEFA.”