Blatter, FIFA president since 1998, bagged 133 votes at the FIFA Congress that has 209 members but three votes were deemed invalid. 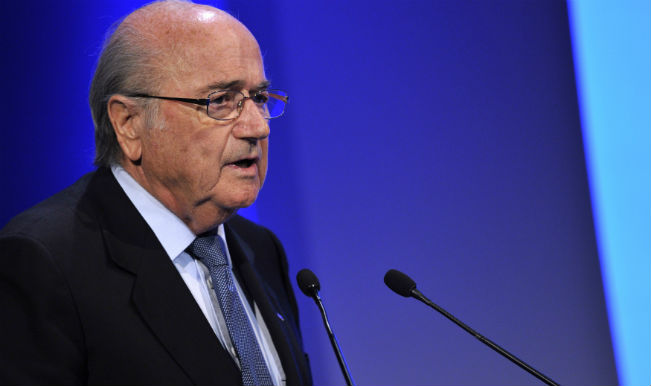 Zurich, May 29 Sepp Blatter was re-elected as the president of the world football governing body, FIFA, for the fifth consecutive time as he defeated lone challenger, Jordan’s Prince Ali bin al-Hussein. Prince Ali conceded defeat as he got only 73 votes in the first round of the election, while Blatter, FIFA president since 1998, bagged 133 votes at the FIFA Congress that has 209 members but three votes were deemed invalid. Also Read - FIFA Cancels Next Year's U-17 Women's World Cup in India, Allots it 2022 Edition

The presidential race was heading towards the second round as Blatter failed to get a two-thirds majority, garnering only 133, seven short of the votes required. But Prince Ali conceded defeat as it was more than obvious that 79-year-old Swiss would walk away winner in the second round that required only 105 votes for victory. Also Read - Lionel Messi's Goal Disallowed by VAR During Argentina-Paraguay World Cup 2022 Qualifier Creates Controversy

The result comes in the wake of the graft scandal that rocked the football world when Swiss law enforcement authorities swooped down on a hotel Wednesday and arrested seven FIFA officials, including two vice-presidents.

This was done because of a request from the US Justice Department which said that nine FIFA officials, including the two vice-presidents, and five corporate executives, were being charged with “racketeering, wire fraud and money laundering conspiracies, among other offences, in connection with the defendants’ participation in a 24-year scheme, since the 1990s, to enrich themselves through the corruption of international football”.

In explaining why the US Justice Department was prosecuting leaders of FIFA, Attorney General Loretta Lynch had said the defendants and their co-conspirators partially planned their scheme in the US, used the US banking system to pay bribes and “planned to profit from their scheme in large part through promotional efforts directed at the growing US market for football”.

Apart from this, Swiss prosecutors have launched a separate investigation into the bidding process for the World Cup tournaments in 2018 in Russia and 2022 in Qatar.

Many of Fifa’s major sponsors, including Coca-Cola, Visa, Adidas, McDonald’s, Hyundai Motor and Budweiser, have expressed concern over the investigations.