Singapore Slammers would start their campaign against Micromax Indian Aces on November 28. 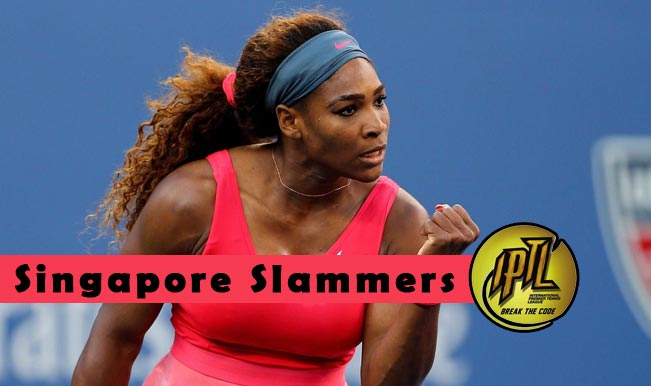 The most dominating player on the women’s circuit, Serena Williams is the flag-bearer of Singapore Slammers, one of the franchise team of International Premier Tennis League (IPTL). The World No.1, Williams is undoubtedly the strongest player at the event. She has had quite a dream-run in the calendar year 2014 with third successive US Open title, year-ending WTA Championships title and would be eyeing the first IPTL title. Also Read - French Open 2020: Rafael Nadal, Serena Williams, Dominic Thiem Enter Second Round

International Premier Tennis League, which is claimed to revolutionize the sport, has found star campaigner with the likes of Serena Williams leading Singapore Slammers team. The team co-owned by cricket legend Sunil Gavaskar would host the second leg of the tournament from December 2-4 at Singapore Indoor Stadium. Also Read - US Open 2020: Serena Williams Ousted, Victoria Azarenka And Naomi Osaka to Contest Final

Apart from the top-ranked Serena Williams, Singapore Slammers has a string of big names like Andre Agassi, Patrick Rafter, Leyton Hewitt, Tomas Berdych, Daniela Hantuchova, rising star Nick Kyrgios, along with doubles specialist Bruno Soares. Joshua Eagle, former tennis player and professional coach has been roped in as the coach of the Slammers.

Team News, Records and Players Form: The current World No. 1, is in red-hot form and is expected to be at her competitive best. The younger of the Williams Sisters, Serena definitely holds an edge over the other players of different teams with the American leading a massive 16-2 head-to-head record over Maria Sharapova, her closest rival. Serena has won 18 singles and 13 doubles grand slam titles and will be a serious threat to other’s title chances.

IPTL will also see the former American legend, charismatic Andre Agassi play the tennis at competitive level after a long time. The only player to win ‘Career Super Slam’ (all the four majors, Olympics Gold Medal and ATP World Tour Finals) enjoys a massive fan-following around the globe and his return is bound to  increase the excitement level.

Among the other players that comprise Singapore Slammers are – very consistent Czech Republican Tomas Berdych who is currently ranked  no. 7 in the world, former world no. 5 Daniela Hantuchova who has experience in singles as well as doubles. Patrick Rafter will bring in the flavour of legendary era along with doubles specialist Bruno Soares who has a won a total of 18 titles.

Singapore Slammers boast of a balanced side with great singles and doubles player. They would start their campaign against Micromax Indian Aces on November 28.