Shahid Afridi gets second opportunity as T20 captain of Pakistan. 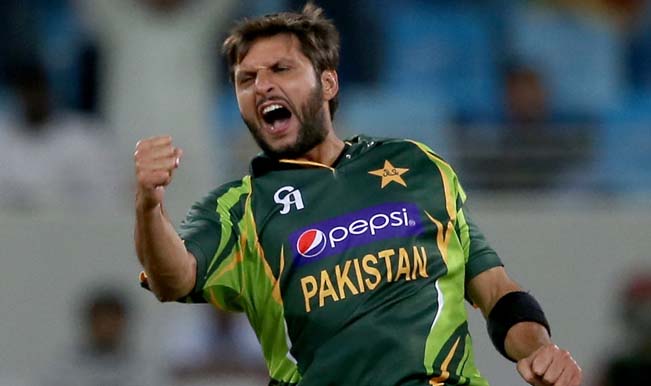 Pakistan all-rounder Shahid Afridi has been appointed as the captain of the T20 squad till the T20 World Cup in 2016, the Pakistan Cricket Board (PCB) have confirmed in an official statement on their website. The 34-year-old takes over the mantle from Muhammad Hafeez following his resignation in the aftermath of their elimination in the Super-10 stage. Also Read - Jammu and Kashmir: Pakistan Shells Mortars in Poonch District Along LoC, Indian Army Retaliates

The statement read, “Shahid Afridi has today been announced as captain of the Pakistan T20 squad till the ICC World T20 in 2016. The slot was lying vacant following Muhammad Hafeez’s resignation after the ICC World T20 held in Bangladesh earlier this year.  The decision to retain Misbah-ul-Haq as captain of Test and One Day squad till next year’s ICC World Cup was also reaffirmed.” Also Read - Munaf Patel, Chris Gayle, Shahid Afridi Among Overseas Players For Lanka Premier League 2020 Auction

Speaking about the appointment PCB chairman Mr. Shaharyar Khan said, “In line with my policy of taking decisions democratically I consulted Cricket Committee and my Board members before announcing these decisions. I wish both Afridi and Misbah very good luck in their upcoming assignments.”

The statement also suggested that teams for next month’s matches against Australia will be revealed in due course.  This is the second time Afridi was appointed as captain of the T20 squad from June 2009 till 2011, lasting 19 matches, out of which Pakistan won just 8. During the same duration he was also captain of the One-Day International (ODI) squad, leading the side in 34 matches including the World Cup 2011. Meanwhile, Misbah-ul-Haq will continue in his current role of the Test and ODI squad till the end of the ICC Cricket World Cup 2015.