There was already huge excitement among Manchester United fans when Carrick revealed the club’s 2008 Champions League winners would be reuniting to face an All-Star XI and the return of Sir Alex will be the icing on the cake. Also Read - Manchester United Make Their Point Against Chelsea; Manchester City, Liverpool Close In At the Top

The legendary manager who hung his boots in 2013 after delivering United’s 20th English Premier League title and his 38th in total, said, “I think the best bit will be seeing the players, to be honest with you. No [I don’t miss managing]. I miss the big games of course but I made my decision and I’m enjoying it. I don’t have to worry about you lads or the agents or the press conferences and having to control that press secretary of mine!

“I’m delighted Michael is getting a testimonial. It tells you Manchester United are probably the only club in England that can do that. Players do tend to stay a long time here. We don’t have players here one minute and gone the next. If you go right back to my time, most of the players stayed 10 or even more years. I think we can be proud of that fact, being a family-type club. It encourages players to put roots down here and enjoy it. 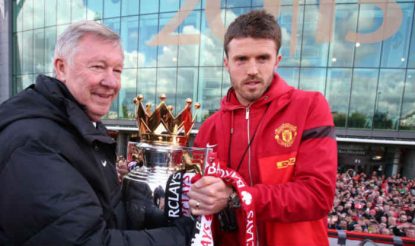 “I read about what Michael’s intentions are [with the funds raised for the event] and I think it’s very honourable. I think he’s shown he’s prepared to share his success and his contribution to the charity, starting it himself, will be very, very worthwhile.”

On the inclusion of Gerrard and Lampard on the opposition side, he added: “I think it adds spice. I think it’s much better having that than you choose a team, having to travel and you don’t know whether a full squad is going to be there. If Michael’s got guarantees these great players will appear, it will be fantastic crowd as it’s a real attraction.”

United’s Ferguson-led side of 2008 is still affectionately remembered among the fans due to their incredible achievements that year as they reigned supreme in both the English football division as well as the top European club competition.

The legendary manager will come out of retirement for one night only as he leads a team made up of players from one of his greatest ever sides at the club and we will also witness footballing legends like Paul Scholes, Ryan Giggs taking part in the match.

It’s definitely going to be a night to remember for the Red Devils.