The conditions are cloudy but the rain has stayed from Southampton.

New Delhi: India’s wicket-keeper batsman and currently donning the hat of commentator, Dinesh Karthik has provided a crucial weather update for Day 3 of the World Test Championship final between India and New Zealand. Karthik took to his Instagram story to provide the weather update from Southampton.Also Read - Prithvi Shaw And Suryakumar Yadav to Fly to England on July 31 on Special Provision

Karthik wrote that there has been no rain despite the conditions being cloudy but there are still three and a half hours to go for the start of play. Also Read - Atanu Das vs Takaharu Furukawa Men's 1/8 Eliminations: When And Where to Watch India's Archery Match Online And on TV 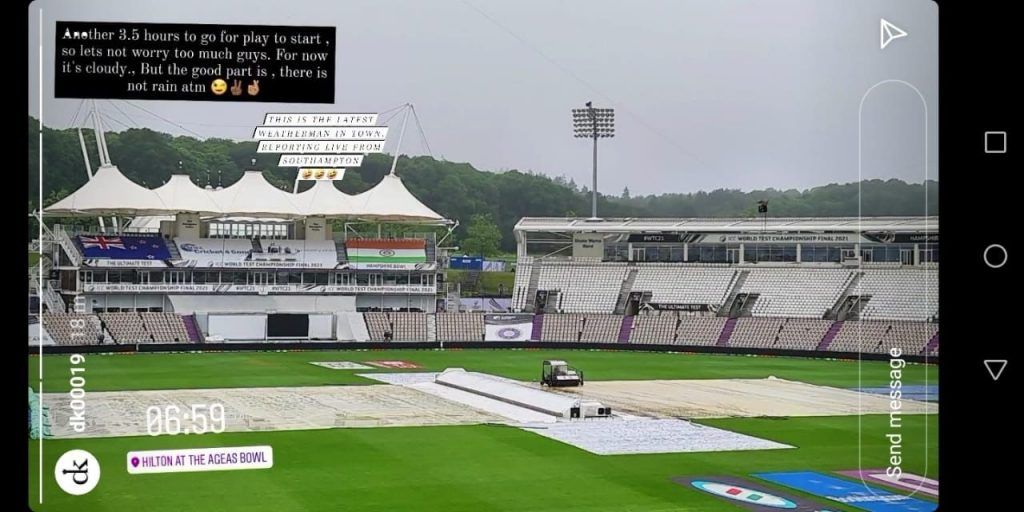 Meanwhile, Dinesh Karthik had also provided a weather update on Day 2 of the Test match. On the other hand, Karthik made an impressive commentary debut and he was praised by the fans as well as the pundits for his deep analysis. Also Read - Anushka Sharma-Virat Kohli And KL Rahul-Athiya Shetty Pose in Latest Group Photo, Fans Say ‘Couple Goals’

Karthik has all the experience under his belt and he was able to come up with great pointers in the commentary box along with Nasser Hussain, Michael Atherton, Sunil Gavaskar, Isha Guha, Ian Bishop and Kumar Sangakkara.

On the other side, the weather will be under scrutiny on the third day of the World Test Championship final. The opening day of the Test match was washed out due to rain without a single ball being played.

The much-awaited toss finally took place yesterday as Kane Willamson decided to bowl first in the overcast conditions. Virat Kohli-led team got off to a good start as Rohit Sharma and Shubman Gill added 62 runs for the opening alliance. Rohit Sharma was dismissed after scoring 34 runs by Kyle Jamieson as Tim Southee took a brilliant catch whereas Gill was dismissed by Neil Wagner on the third ball he bowled.

However, Virat Kohli and Ajinkya Rahane were able to get India back into the contest as they showed their experience. India finished with 146-3 after 64.4 overs as they dominated the second day’s play.