Follow Chelsea vs Sporting live online and on tv. 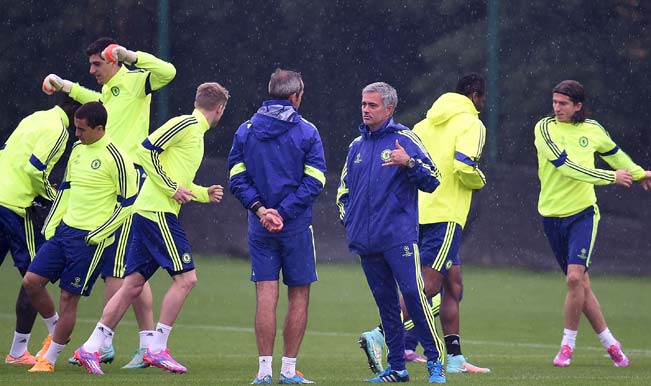 Chelsea travel to Portugal to take on Sporting Lisbon at the Jose Alvalade Stadium in the second UEFA Champions League fixture of the 2014-15 on Tuesday night. The game is scheduled to kick-off at 12:15 am IST (7:45 pm BST; 6:45 pm GMT). Live TV coverage of the match will be on Ten HD and live streaming link will be available on Ten Sports’ official website. Live score updates will be available on UEFA’s official website. Also Read - Happy Birthday, Sunil Chhetri: The Top Interesting Facts About The India Football Icon

In their opening fixture of this competition, the Blues were held to a 1-1 draw by Schalke at Stamford Bridge. Cesc Fabregas scored the opening goal in the 11th minute but Klaas Jan Huntelaar netted the equaliser in the 62nd minute to restore parity for the Bundesliga outfit. Sporting too managed to acquire only a point after against NK Maribor after Luka Zahovi’s cancelled out Nani’s goal for the Portuguese outfit. Also Read - Liverpool Crowned Premier League Champions as Chelsea Beat Manchester City

Chelsea are clearly the stronger side on paper but Sporting have not lost a single match this season and breaking them down on their on backyard could be tricky for the west London club. Click here to read the preview and team news of the match.

Quotes from the camps

Marco Silva (Sporting Lisbon manager): “It is our debut in front of our fans and I am happier because of it – it will be a great atmosphere with the fans helping us a lot. Chelsea are favourites, not only to win the group but also to be in the final together with four or five others. It will be a match with a very high level of difficulty but with our quality and the right attitude we can challenge for the points here.”

“Chelsea will play with their best men and may of course make one change or another. They are a very strong team at all times during the game. They got stronger this season to try and win the Premier League and also the Champions League. We are facing a very strong opponent. It will be a challenge for Sporting. It is a big boost for the club and the fans to play at home against such a big club, one that has a Portuguese coach. But we will not change our identity because of it. We have our weapons.”

Jose Mourinho (Chelsea manager): “I don’t know what favourite means in football. For us a good result is winning. We will try to win – one thing is wanting to win, another is achieving it. Benfica and Porto couldn’t do it [beat Sporting]. Sporting have their strengths and motivations and maybe they think that a draw is good for them. One thing is thinking this, another is playing for it.”

“It has been almost ten years without playing here against a Portuguese team, but for me it won’t be a different match. I try to isolate myself from the emotional aspects. If I had to choose I would pick Chelsea first in our group and Sporting in second. Diego Costa will start tomorrow. Didier Drogba will be out a few weeks because of an ankle injury.”